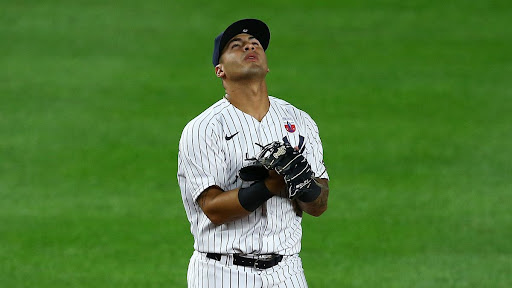 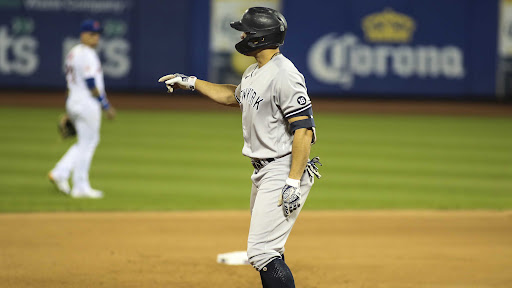 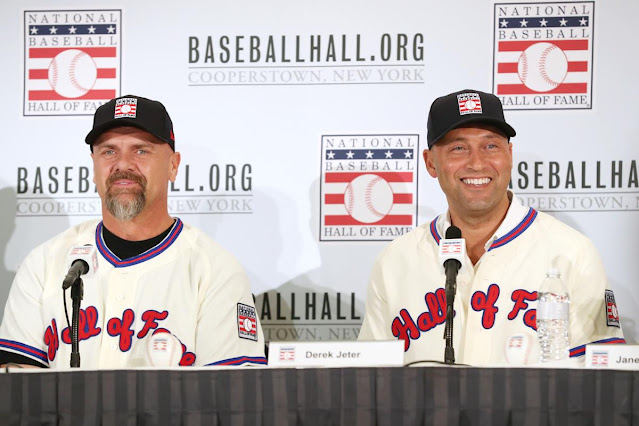 Yankees fans knew this day was inevitable, but that fact does not mean that we are not emotional over the fact that it's arrived.  Photo credit: Yahoo Sports
Post a Comment
Read more 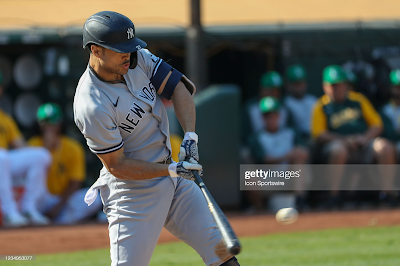 Riding the wave of an 11-game winning streak, the Yankees headed into Oakland this past weekend with a chance to bury the suddenly desperate Oakland Athletics. With the annoyingly good and suddenly streaking Tampa Bay hitting a soft part of their schedule, this was a doubly important series for the Yankees to not lose and hopefully win in order to keep their Wild Card lead and keep their division hopes within reach. We could go into a few excuses for why (winning streak hangover, awkward west coast start times, Oakland being a desperate team) but in somewhat disappointing fashion, the Yankees “earned” a split of this series with Oakland and now will head off for a three game set with the Los Angeles Angels. Let’s recap the series that was. Credit: Kiyoshi Mio/Icon Sportswire via Getty Images
Post a Comment
Read more

Wandy Peralta quickly becoming one of the Yankees' most reliable relievers 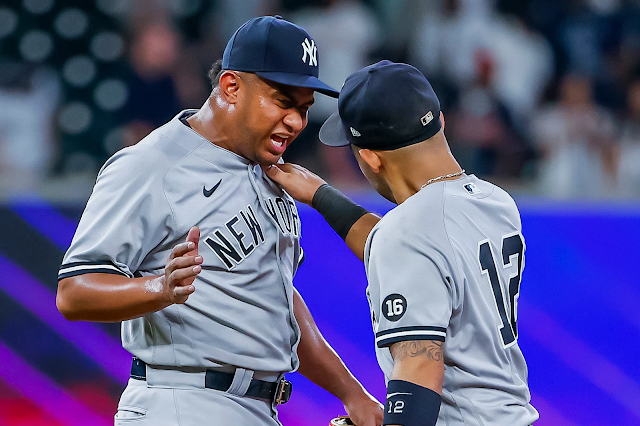 The Yankees have been the hottest team in baseball for a decent while now, extending their winning streak to 12 late last night in Oakland. The hitting has become more consistent with clutch at-bats taking place now that were missing earlier in the year. The starting pitching has been perhaps the biggest surprise, pitching as well as any other staff across the league, and that’s without Luis Severino and Corey Kluber.
Post a Comment
Read more 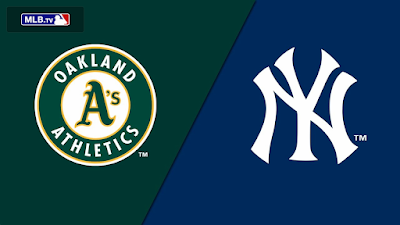 The Yankees are heading to the west coast, and they head off on this seven-game west coast swing as the hottest team in baseball. They are the owners of an 11-game winning streak and have won their last 10 consecutive series. It has been a remarkable turnaround for a team that looked like it was asleep for the first half of this season, but there is still work to be done. The Yankees current 11 game winning streak is their longest since 1985 and it has seen them go from trailing both the Red Sox and the Oakland A’s in the Wild Card standings, to leading both by four and five games respectively in the loss column. The Yankees flipped a switch in mid-July and now have ridden an impressive white hot winning streak into the driver’s seat for a playoff stretch as we head to the stretch run of the regular season. The first series up in this all-important stretch run, is the aforementioned Oakland A’s. The A’s are a talented team that had an impressive 13 game winning streak of their own ea
Post a Comment
Read more

Series Recap: Yankees run winning streak to 11 with a sweep of the Braves 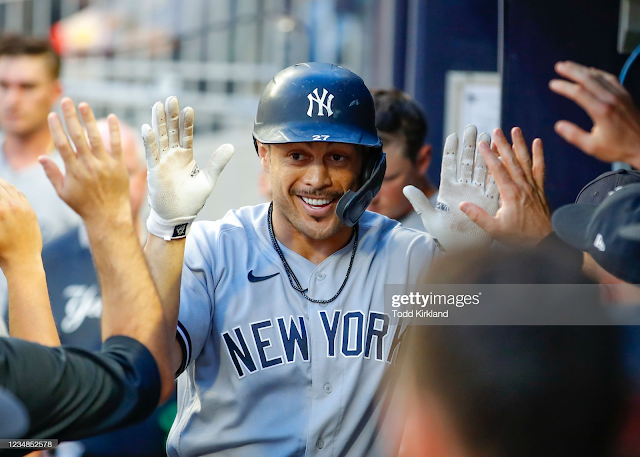 Coming into this series, the Yankees and Braves had been the two hottest teams in all of baseball for the month of August, with both teams going from out of a playoff  spot in July, to comfortably in one during the present day. As Paulie said on the broadcast, it was the first time since 1902 that two teams with nine game winning streaks faced  off against each other, quite the amount of time for something to not happen in baseball. This two game set started a vital week for the Yanks, as a four game set in Oakland looms with a team right on the Yanks tail in the wild card race. With this being only a two game set, the Yanks streak of consecutive series wins was at risk, needing to win two vs a very good team. Yet that’s just what the Yanks did, winning both games including an absolute nail biter on Tuesday night, in typical 2021 Yankees fashion. Credit: Todd Kirkland/Getty Images
Post a Comment
Read more 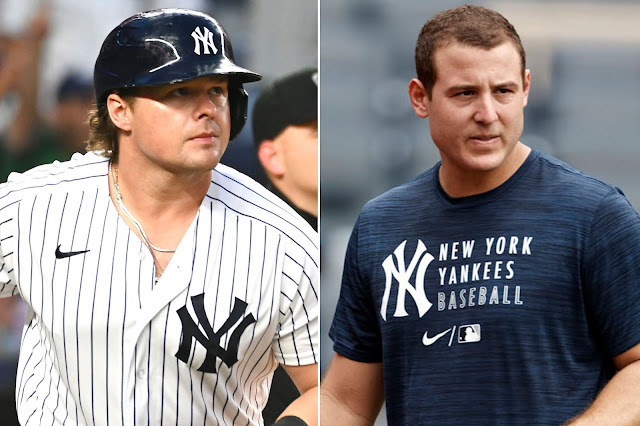 Except for presumably Tropical Storm Henri, nothing, of late, has stopped the "New" New York Yankees from pursuing their path to a postseason spot. Photo credit: New York Post
Post a Comment
Read more

What has gotten into the New York Yankees? 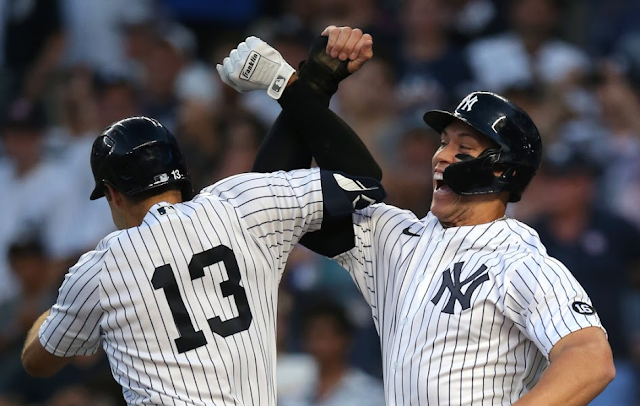 The New York Yankees have essentially completely transformed themselves here in the second half of the season. Since they were 41-41 (1 more game than halfway through the 162-game season) the Bombers are 29-11 giving them the best record in the league over that span.
Post a Comment
Read more

Series Recap: Yankees sweep the Red Sox and move back into a playoff position 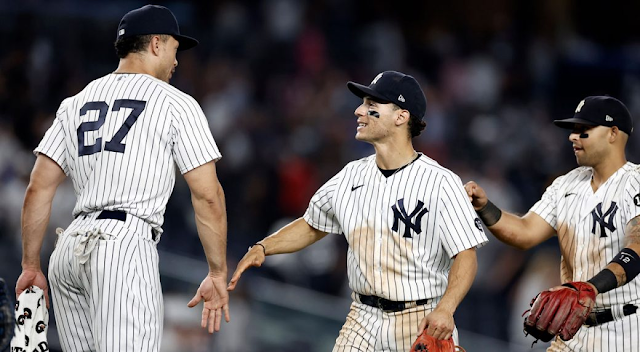 Well, what a difference a month makes. On the fourth of July the Yanks were a .500 baseball team, while the Red Sox had the best record in the A.L. Fast forward to now and the Yanks are a full game ahead of the Red Sox after completing a three-game sweep of their arch rivals in the Bronx. As usual, none of the three wins were easy and all three games seemed to be heading off the rails at one point or another. However, a win is a win and the Yanks just keep getting it done, improving their record to 23-9 since the All-Star break.
Post a Comment
Read more
More posts