Expectations for Mark Teixeira in 2015

There is no doubting that Mark Teixeira has been major disappointment the past three seasons for the Yankees. He has two seasons remaining on his mega eight-year $180 million contract that he signed following the 2008 season. 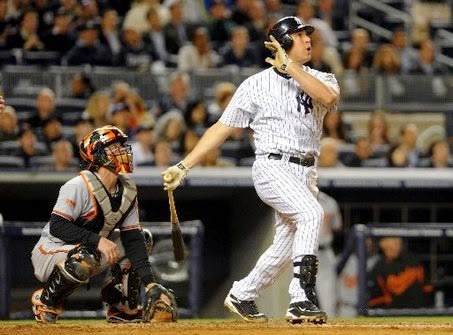 For the Yankees sake, Tex needs to come back strong and return to his old ways in being  middle-of-the-order, legitimate, run producer. The Yankees lacked offense last season and Teixeira had a big role in that. If Tex can even produce half of what he used to, the Yankees offense could drastically improve. Not to mention the fantastic defense he provides at first base.

Another interesting note that might benefit Teixeira is that Yankee manger Joe Girardi hinted at the fact that Alex Rodriguez might be getting time at fist base in 2015. That would take some of the pressure off Teixeira. If Rodriguez were to make the transition to first base, Girardi would be able to rest Tex more often and give him days as the designated hitter.

Girardi has a few options for Teixeira to keep him on the field and get as many games possible out of him. The Yankees need his bat in the order to bring their offense back to where it needs to be.

So what are realistic expectations for Mark Teixeira in 2015? Assuming he is healthy for most of the season, Yankee fans should expect Tex to play around 140 games and a stat line close to .253/24/74.