Why losing Hiroki Kuroda might not be so bad

It’s safe to say that just about the entire Yankee fan base was disappointed when it was announced Friday that Hiroki Kuroda would be leaving the organization to return to Japan to pitch for his first professional team, the Hiroshima Toyo Carp. 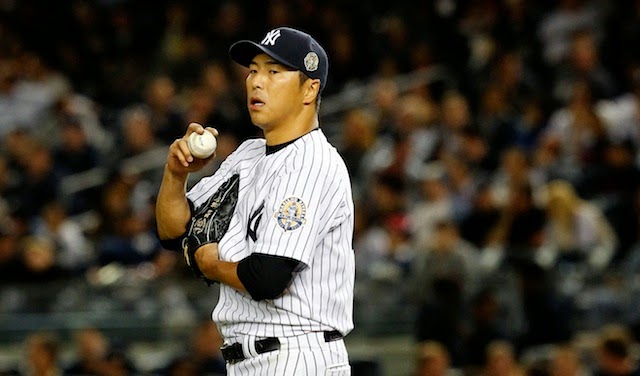 Kuroda, who had been with New York since 2012, went 11-9 with a 3.71 ERA in 32 starts this season- making him the most consistent starter on the staff. With early injuries from Sabathia, Nova, Pineda, and a mid-season injury from Tanaka, Kuroda posed as the only member of the opening day rotation to never once hit the DL. Without our normal starters, Kuroda anchored a staff supplemented with pleasant surprises in the likes of Brandon McCarthy, Shane Greene, David Phelps, and Chase Whitley.

Kuroda sure didn’t disappoint in his time as a Bomber, as over his Yankee tenure he sported a 38-33 record with a 3.44 ERA in 97 starts. No other starting pitcher for the Yankees before him had made at least 50 starts and produced a lower career ERA since Ron Guidry (3.32 from 1975-88). But at the close of the 2014 season, we all saw that his time in pinstripes might be winding down. Kuroda, who turns 40 in February, had been deciding between retirement, staying with the Yankees, or returning to Japan. At the end of the 2014 season Kuroda said, “...the fact that I was able to stay in the rotation the full year without getting injured, that’s one thing I can say that fulfilled me.” Ultimately, he was satisfied with this being his last year as a Yankee.

Growing up, it was always fun watching Kuroda pitch. I loved how he held his glove up over his head and how he paused in his windup before eventually releasing the ball. His consistency made him great, and he will be greatly missed in the Yankee organization, as well as in the MLB as an entirety.

Looking towards the future, we have some up-and-coming pitching prospects in our farm system, along with some veterans returning. With the re-signing of Chris Capuano, who Brian Cashman says will be a starter, a trade involving David Phelps for Nathan Eovaldi of the Marlins, and the anticipated returns of Sabathia, Tanaka, Pineda, and Nova, our rotation looks strong. This declaration is made contingent on all pitchers remaining relatively healthy- something, of course, that wasn’t the case last year. With that being said, I have full confidence that these pitchers will fill the hole that was left by Hiroki Kuroda. And let’s not forget that Max Scherzer is still on the market, *cough* Brian Cashman.

But, without a shadow of a doubt, a strong starting rotation is an order if New York hopes to bounce back in 2015. If this does indeed happen, everyone will be reminded as to why it’s so great to be a Yankee fan!