I want to make things clear right off the bat (no pun intended): This article is not a penetrating expose, or one of saber-metrical, analytical or statistical backing, but rather is an optimistic approach towards this year’s Yankee roster- as currently assembled- contingent solely on speculation and subjective (presumably logical) reasoning. Breaking down various aspects of the team, I attempt to offer a reason to be hopeful in 2015. 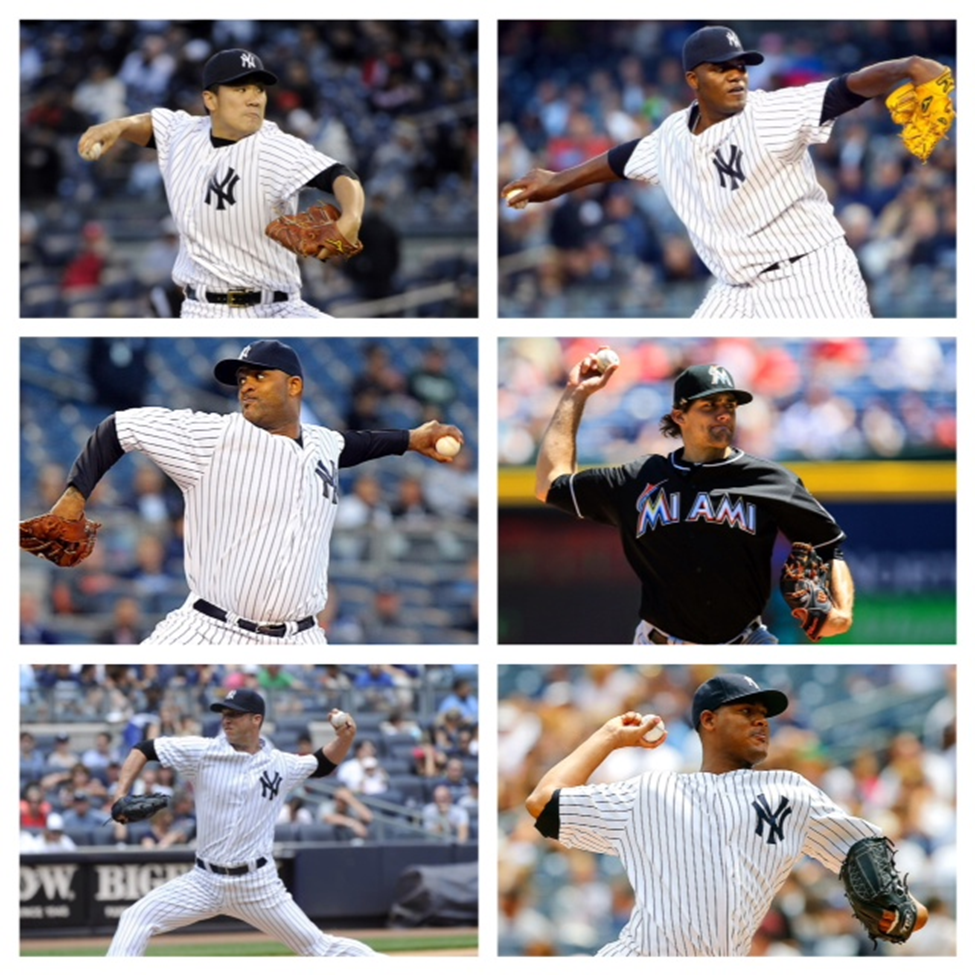 A lot of pro’s can be looked at when granting respect to the New York starting five. One common trait that is present among the pitchers (save CC Sabathia and Chris Capuano who is a fill-in) is that they are all very young- especially now since we know Hiroki Kuroda, who was to turn 40, isn’t coming back. As evident by the workings of the Yankees in the offseason thus far, they are clearly attempting to rebuild- at least in part- and assemble a team with not just this year in mind, but also the future. I like this strategy, a strategy that hasn’t been undertaken in the south Bronx for a long time.

At just 26, Masahiro Tanaka stands unchallenged as the unequivocal ace of the Bomber rotation. Assuming his elbow is healthy and doesn’t act up again (which is quite the assumption but hey- this is an optimistic article!), there is no reason to think that he can’t be the pitcher he was in the first half of 2014. At his best, we’re talking about a guy that rivals just about anybody, maybe save Clayton Kershaw, as MLB’s top pitcher. Had his elbow never acted up, you may be looking at an All Star Game starter, Rookie of the Year Award winner, as well as even a CY Young Award winner. Oh and, of course, maybe a postseason berth for Derek Jeter and the Yankees in 2014…

Just behind Masahiro in the starting staff is Michael Pineda, checking in at an enormous 6’7” and 260 lbs. His arsenal of pitches is equally as intimidating as his demeanor. What has plagued Pineda, 25, throughout his career, and especially since being acquired from Seattle in that block buster deal for Jesus Montero nearly three years ago, is with regards to his health (or lack thereof). Last year, he finally made his long awaited debut for the Yankees, and didn’t disappoint- pitching to an era south of two in the month of April. He wouldn’t pitch into May however as, following his infamous suspension, he would experience a variety of shoulder and back injuries that would ultimately sideline him until August. Upon returning, he looked as good as ever so Yankee fans have every reason to believe that he can carry that into 2015- health permitting.

From here the exact order of the rotation becomes a bit confusing, but I’ll go with Mr. Carston Charles Sabathia, a man whose best days are clearly behind him, and was out nearly all of last year due to a knee injury. It’s hard to find much to be excited about here as; after all, this is a guy in his mid-thirties still being paid in excess of $20 million per, as he is quickly approaching A-Rod as claiming top prize on the team for most bloated contract. But I have faith! Let’s not forget, we’re talking about a former CY Young award winner here who obviously knows how to pitch. The transformation from fireballer to soft tosser has been successfully made many times before. Even last year during Spring Training, Sabathia dominated while living in the upper 80’s- going 3-1 with a 1.29 era. One can only hope that that was a foreshadowing of things to come. Remember, we’re not looking for an ace in Sabathia, but rather, just as he’s placed here, a middle of the rotation starter.

Next up we have perhaps the most intriguing figure of the new rotation, 24 year old hard thrower Nathan Eovaldi. When acquired from Miami in a deal involving Martin Prado last month, it was made it clear to all Yankee fans that Cashman and management were determined to get younger. Who exactly we got in exchange for what was our best hitter is a bit of to-be-determined in my opinion, as his stuff tells a different story than his stats. As previously mentioned, he has a big arm, and last year was among the league leaders in average fastball velocity. On top of that, he has an assortment of off-speed pitches which- while not entirely up to scruff- show signs of potential. I look forward to seeing what some work with the Yankee coaching staff can do for Eovaldi- a young man who clearly has yet to attain his max potential. Pitchers with seemingly good stuff who have struggled to put it all together on the field have come to the Yankees only to see things turn around quickly (see Brandon McCarthy).

Rounding out the order, likely at least until June, is veteran south-paw Chris Capuano, who the Yankees resigned this offseason to a one year deal. Just as you would expect out of a number five caliber starting pitcher, there is nothing that stands out about Chris- as in limited time last year he was literally the definition of ‘average’ while with New York- going 2-3 with a 4.25 era. He will be asked to anchor the caboose of a rotation that ideally would include Ivan Nova, but due to Tommy John Surgery he will not be nearly ready in time for Opening Day. In the meantime, we can hope that Capuano can hold his own for a few months, something that I deem not an incredibly tall order- especially for an established veteran as is himself.

Overall, a few themes appear to stick out when attempting to define the 2015 Yankee staff: Youth, health concerns, and veteran southpaws. There is no black and white definition to any of these pitchers, as instead the performance of each is contingent on many lingering factors that remained to be seen as to how they will play out. In what has been, at least in the eyes of many Yankee fans I communicate with on Twitter, a largely pessimistic attitude about this offseason, fueled in part by consecutive playoff-less seasons, I hope I have presented to you a reason for optimism regarding the New York starting five- one that I deem capable of great things in 2015.