Getting to know Johnny Barbato

Growing up as a huge Boston Red Sox fan, with Roger Clemens as his idol, 22 year old Johnny Barbato may not have foreseen the day where he would be traded to the New York Yankees. However, the former sixth round pick out of high school in 2010 is looking forward to being a member of the storied franchise. 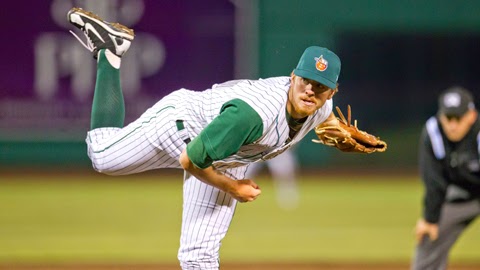 Recently acquired from the San Diego Padres for right-hander Shawn Kelley on Dec. 29, the right-handed prospect Barbato appears to be on track toward dawning pinstripes very soon. Barbato was able to turn in a 2-2 record with a 2.87 ERA converting 16 out of 18 save opportunities with the San Antonio Missions in 2014, a Double-A affiliate of the San Diego Padres. Barbato was well on his way towards a great season before suffering from elbow problems and missing the second half of the season.

With much speculation surrounding the severity of his injury, Barbato stands by the fact that he thinks he can avoid Tommy John Surgery. After playing catch and throwing an inning in October, Barbato believes he will be good to go by the start of the 2015 season.

Barbato was able to talk to us at the Bronx Bomber Blog and we asked him quite a few questions. Here’s the conversation we had with him, enjoy!

1. Question: “Who was your favorite team and player growing up?”
Barbato: “Roger Clemens and the Boston Red Sox.”
2. Question: “Is there a particular player you try to model your game after in a way? If so, who?”
Barbato: “Well it would have to be Roger Clemens.”
3. Question: “What was your initial reaction when you heard you had been acquired by the Yankees?”
Barbato: “Well I couldn’t believe it. I was so shocked but super excited at the same time.”
4. Question: “What are you most looking forward to in working your way to the Bronx?”
Barbato: “Well just new places and opportunities and coming into the year showing everyone I’m healthy and ready to go.”
5. Question: “What’s the most exciting thing about being a Yankee on and off the field?”
Barbato: “On the field I would have to say that I am playing for a team that is legendary. The guys that have played with the Yankees through the years and it’s just surreal to think about having a chance to play for them. Off the field, I would just say that Yankees fans love their players and will always support them.”
6. Question: “How do you plan on building on the success you had in AA last season?”
Barbato: “Just staying healthy. I think if I can stay healthy everything will be fine.”
7. Question: “Is there any chance you’ll need Tommy John Surgery or are you going to be good to go in 2015?”
Barbato: “Well I’ve been playing catch and everything is back to normal and I threw an inning in October and everything was good to go.”
8. Question: “Has the club indicated what they anticipate your role to be in the coming seasons?”
Barbato: “None of that has been talked about yet.”
9. Question: “What is it like being a member of the Yankees being that you were a Red Sox fan growing up?”
Barbato: “Well ever since I was drafted, all of that went out of the window because I found out pretty fast how much of a business this game could really be. And now knowing the Yankees are the team everyone wants to play for and to be a part of the history is surreal and I’m excited and thankful for the opportunity.”

10. Question: “Is there anything in particular you need to improve on in working your way up to the big leagues?”
Barbato: “When it comes to making my way up I think I get away with being up in the zone too often in AA and I am pretty sure that wouldn’t fly in the show.”

The fastball, curveball and change-up relief pitcher could land in the Bronx in the near future. He is currently on the Double-A affiliate of the Yankees, the Trenton Thunder’s roster and will be a major bullpen piece for them. Johnny, we here at the BBB wish you the best of luck in the future and really appreciate you joining us for the interview!