How a Yankee rotation with Max Scherzer compares to AL East

While replacing Derek Jeter may seem like biggest change the Yankees will have in 2015, their rotation has gone under some major revamping. Brandon McCarthy, Hiroki Kuroda, Shane Greene and David Phelps are long gone. Replacing them in the depth chart are a healthy C.C. Sabathia, Nathan Eovaldi, Chris Capuano, Adam Warren, and a rehabbed Ivan Nova (in May).

There is a $200 million gorilla in the room, Max Scherzer, the best free agent pitcher to hit the market is still available. To this point many big market teams have steered clear of expressing interest in the starter. While the Yankees top brass have said Scherzer is not in the cards it’s not over until it’s over and let’s think about how adding another bona-fide ace to the Yankees rotation will compare to the rest of the AL East. 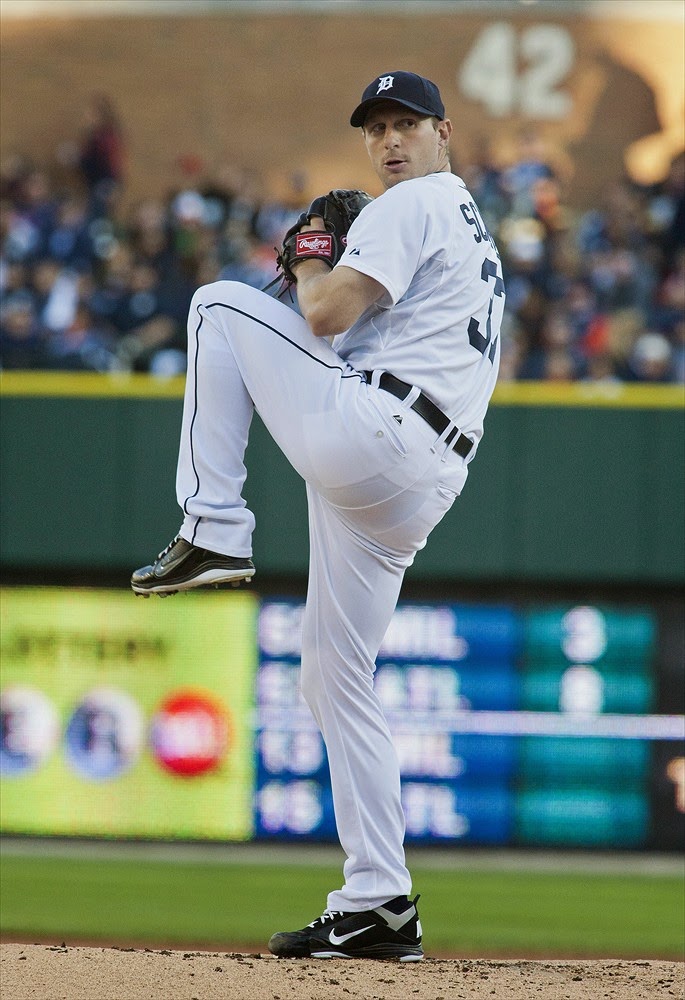 Before the theoretical acquisition of Scherzer the Yankees rotation was looking promising.  If Tanaka is healthy he is easily the best pitcher in the AL East. Adding Scherzer to the rotation would give the Yankees two aces when the Orioles are the only team with one currently. Pineda, Eovaldi and Sabathia could match up nicely against 3-5 of the other AL East teams.

The Red Sox have a solid rotation but they don’t have a pitcher who can match up against another teams ace. They are all solid but not spectacular. The Orioles rotation looks a lot better without Ubaldo Jimenez in it to start the season. Chris Tillman is undoubtedly their ace and overall their staff had a very good year (not a stretch since they won the AL East). Despite another solid rotation in 2015 regression is to be expected with the loss of 2/3 of their outfield. The Blue Jays have a mixture of youth with Stroman, Hutchison, Sanchez and tried and true veterans in Dickey and Buehrle. Dickey hasn’t been the ace the Blue Jays thought he would be when they acquired him and the younger pitchers have ace potential and this year could be telling. The Rays have an extremely youthful rotation. Alex Cobb is the elder statesman of the group at 27. This high upside group could be great but I’d still take a top two of Tanaka and Scherzer if given the choice. Given the overall solid rotations to star the season in the AL East Scherzer would really put the Yankees over the top and potentially give them the best rotation.

Rotochamp predicts Scherzer to have yet another great year in 2015. The value Scherzer would bring to the rotation is even more apparent when compared to the pitcher he would likely bump from the rotation, Chris Capuano.

There are a few ways to look at Chris Capuano’s projections. If you look at his stats as a 5th starter they are not pretty. His innings pitched total means that if he were to stay healthy and stay in the rotation for 32 starts he would be averaging about 4 innings per start. Starts averaging 4 innings would put a strain on the bullpen. Perhaps Rotochamp is factoring in Ivan Nova returning in June and snatching up most of the starts left. Whether it’s Ivan Nova or Max Scherzer bumping Capuano from the rotation his stats look a whole lot better if he is a swingman.

Max Scherzer’s Rotochamp projections are that of another Cy Young caliber year. Scherzer has been extremely durable throughout his career. Since breaking into the show permanently in 2009 he has made at least 30 starts. In 2014 he set his career high in innings pitched at 220.1. Based on age, a non-existent injury history and skillset it would not be beyond belief to expect Scherzer to have about 4 years of Cy Young caliber pitching left.

The last long term pitching contract the Yankees gave out that is a decent parallel to Scherzer would be C.C. Sabathia. Scherzer is 2 years older then Sabathia at the time of his free agency but Sabathia had pitched for 4 more years. Through the first 6 years of Sabathia’s tenure in pinstripes he has produced 4 excellent years, 1 subpar year and 1 subpar/injury-riddled year. While Sabathia and Scherzer aren’t a perfect comparison if they were to follow the same career path I would definitely sign up for that. On a 7-year for Scherzer it is reasonable for him to produce 4 excellent years, 2 slightly above average to league average years and 1 subpar year. Until players are paid for their current performance and not past performance fans will have to make peace that the end of contracts are going to go south. Despite a long-term commitment I believe that Scherzer is the perfect fit for now and in the future for the Yankees. The AL East is up for grabs and adding Scherzer would definitively give the Yankees the best rotation and put them over the top.