When I say Adam Warren, most of us probably think of one game, the one in which he blew the game in Baltimore at the end of the season which ultimately ended the Yankee playoff quest. Yes, I too was quite angry, but I think it’s important to realize Adam Warren was quite a strong piece for the Yankees in 2015. 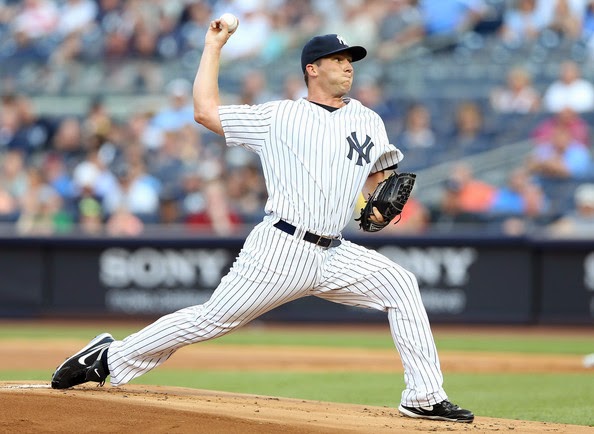 (photo via zimbio.com)
I would gander most Yankees fans don’t that Adam Warren had a spectacular ERA of 2.97 (2.89 FIP) in 78.1 IP during the 2014 season. In other words, he had a lower ERA in more innings pitched than ex-Yankee closer David Robertson. Pretty Solid.

Additionally, Warren’s ERA+ of 130 and WAR of 1.4 in 2014 top Robertson’s ERA+ of 126 and WAR of 1.2. No argument can be made that I am twisting numbers or there is too small a sample size seeing as Warren pitched more innings than Robertson. Simply put, Warren might have actually been the second best Yankee reliever on the team after Dellin Betances.

Before the D-Train arrived and Betances had his historic season in the Bronx, Warren was handling the set up duties of Joe Girardi and the Yankees. Early on it could be a roller coaster ride, but those first few months he got the job done, posting a solid 2.79 ERA in the first half.

The second half, it appeared Warren was simply worn out and not used to the immense work load the major leagues demand, as evidenced by that outing in Baltimore, and he wasn’t quite as sharp sporting a 3.26 ERA, which still isn’t too bad.

What makes previewing Warren difficult is the fact that Yankee officials have stated they would bring him into spring training as a potential starter for the 2015 season. Now don’t get me wrong, the Yankees rotation is a ticking time bomb waiting to explode, but I don’t think Warren would excel in a starting role.

In his career in the big leagues Warren has a 6.97 ERA and in those three innings only last 10.1 total innings. Conversely, Warren has a sharp 3.23 ERA in nearly 150 IP in relief which tells us his success in the bullpen is no accident and he’s better suited for that role.

Additionally, if Warren got worn out in the relief role, he certainly is going to get worn down as a starter having to throw 5+ IP every fifth day. As a starter, Warren’s ERA sat strictly at 92MPH, but in the relief role he’s been consistently sitting about 94-95MPH. He’s just plain better suited for relief pitching and excels at it.

Hopefully we have discovered that Adam Warren is actually a solid relief pitcher and throwing him into a bullpen with guys like Dellin Betances, Andrew Miller, David Carpenter, etc. would certainly give the Yankees the best bullpen in the game.