Don't Count Out the Yanks

After missing the playoffs the past two seasons, and a relatively quiet off-season for the New York Yankees many people are counting them out of playoff contention in 2015.  However looking at the team as a whole you start to see similarities to a team that had a very successful October in 2014, the Kansas City Royals.  The Royals barely nudged their way into postseason baseball in 2014, but once playing ball in October, their bullpen took over.  The Royals relied on stellar defense, timely hitting, and a great bullpen to make their way to the Fall Summer Classic. 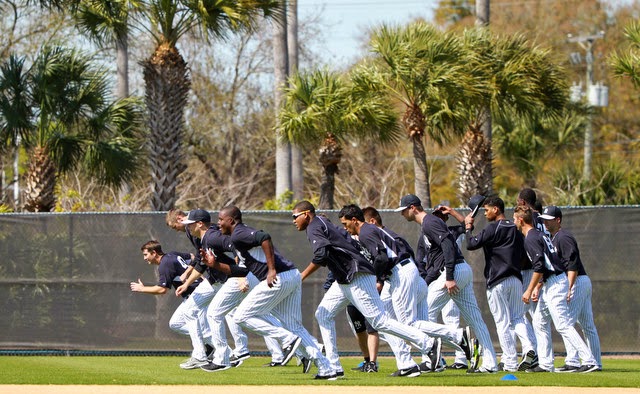 Not only is the Yankees bullpen similar to the 2014 Royals, but the Yankees defense has improved since last year.  All 8 positions on the field (not counting the pitcher) are above average fielders.  Although our captain Derek Jeter will be missed, the Yankees couldn’t have picked up a better defensive replacement in Didi Gregorius.  Yes, his offense is below average as he only batted .226 in 2014 with the Arizona Diamondbacks, but if he can get his average close to .250 his defense will save the runs that he doesn’t provide at the plate.

Also, the Yankees power numbers have dropped in the previous two years, with the lose of Robinson Cano to Seattle and an injury prone middle of the order in Carlos Beltran and Mark Texiera; the Bronx Bombers need to find another way to score runs other than relying on the long ball.  In the regular season the Royals hit a Major League low 95 home runs in 2014. Looking at that, the Yankees need to rely on their defense and timely hitting in order to have a successful 2015.  The Yankees made all the right moves this off season in order to improve those two aspects of their game

Yes the signing of Yoan Moncada would have been nice, but the Yankees signed the needed players to improve on a poor 2014 season.  The new Yankee Stadium has proven to be a launching pad for left handed hitters.  It’s important to have guys in the bullpen that are strikeout pitchers rather than guys that pitch for contact.  Last year Dellin Betances proved to be just that as he broke Mariano Rivera's single season relief pitcher strikeout record. With the addition of Andrew Miller, if the Yankees offense can score some runs and the starting pitching can give a solid 6 or 7 innings the Yankee bullpen should be able to hold off opposing hitters the rest of the way.

The key to the Yankees having a successful 2015 is going to rely on a strong first half of the season.  If the Yankees go into the all-star break either in the lead of the AL East or a few games out of the lead; the team should be in good shape to make the playoffs.  Brian Cashman has proved in previous years that he can pick up the necessary players right before the trade deadline that improve on the Yankees first half weaknesses.  Once in the playoffs, the Yanks have all the right tools to succeed.  With three or four starting pitchers that can provide a solid 6 or 7 innings (providing of course they stay healthy) and a shutdown bullpen, the New York Yankees could be a team to be reckoned with in October.