RECAP----
The Yankees opened up Spring Training this afternoon at the Philadelphia Phillies complex. The Bombers jumped out to an early 1-0 lead in the first inning off an RBI single from Jose Pirela. The Phillies were able to scratch two runs off Luis Severino, one off Diego Moreno, and two (unearned) off Jacob Lindgren. Jake Cave opened scoring back up for the Yankees with an RBI single to bring the score to 2-5 Phillies. Then came the blast off the bat of Yankees top prospect Aaron Judge, a three-run homer on a 3-2 count to tie the game in the top of the ninth. Chasen Shreve got into a bit of trouble in the 9th but was able to get out of it leaving the score deadlocked at 5 as the Yankees tied in their first Spring Training game.

MY TAKE----
Overall, the Yankees enjoyed a solid start to their 2015 Spring Training. Slade Heathcott was impressive as he went 2-2 with a double and Greg Bird also played well going 2-3 with a double. Luis Severino pitched very well in the 3rd inning striking out two and getting the third batter on a broken bat ground out. However, he got bounced around a bit in the 4th inning ultimately giving up 2 runs. Rob Refsnyder was quiet, going 0-2 with a strikeout and a walk. Finally, quite possibly the biggest prospects in the system (literally and talent-wise) hit a clutch three run home run with 2 outs in the 9th to tie the game. His blast was the main takeaway from today’s game as the Yankees move their record to 0-0-1. 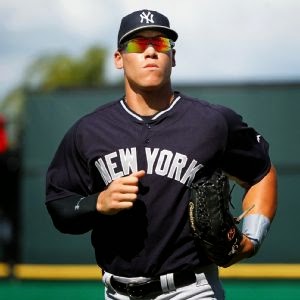 Below I have attached the box score from the game, and I have color coded Yankees players in blue and the Phillies players in red, because I love you.