By Chad Raines - May 26, 2015
This morning, Tuesday, May 26, the first All-Star ballot update was released. To the dismay of Yankee fans like myself, no Yankee would be voted on if the voting ended today. As a matter of fact, no Yankee position player is even in second at their particular position. The top voted players include Miguel Cabrera (1B), Jose Altuve (2B), Nelson Cruz (DH) and 5 (FIVE) Kansas City Royals players which are Salvador Perez (C), Mike Moustakas (3B), Alcides Escobar (SS), Lorenzo Cain (OF) and Alex Gordon (OF). The final man making up the 9 man roster is Mike Trout (OF) who is second in votes amongst outfielders.

Interestingly enough, Salvador Perez is the top overall vote getting with 1,447,753. A few Yankees in the mix at their position include Mark Teixeira who is third amongst first basemen, Brian McCann who is a close fourth in the catching race, Alex Rodriguez who is third in the DH category and Jacoby Ellsbury, Brett Gardner and Carlos Beltran who sit seventh, twelfth and thirteenth, respectively.

Remember to log on and vote all 35 times for Yankees! The full ballot is posted below for your convenience. Have a nice night and go Yankees! 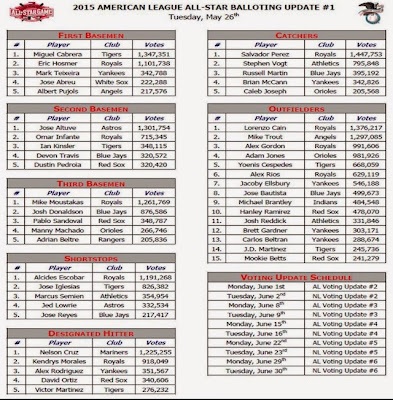