By Chad Raines - May 19, 2015
In addition to tonight's loss, the Yankees were faced with even more bad news in that their star outfielder Jacoby Ellsbury would be headed to the 15-day disabled list. In a questionable injury as far as the magnitude of it, the Yankees have been incredibly private with this disclosing it as a "right knee injury." 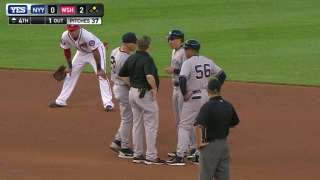 The injury occurred in the 4th inning of Tuesday's loss to the Nationals after a hefty cut from the left-hander on a 1-1 pitch. Immediately after the pitch, Ells was stretching and grimacing as he attempted to walk it off only to be walked later in the at bat. After running to second on a Brett Gardner ground out, Joe Girardi and trainer Mark Littlefield ran out to check on him. In obvious discomfort, Ellsbury was forced out of the game.

This injury couldn't come at a worse time as the team has struggled of late losing 6 of their last 7. Ells has enjoyed a lot of success hitting to a team leading .324 average.

The interesting part is how confidential the Yankees are keeping the injury only disclosing it as a "right knee injury." Although it didn't look too serious on the surface, Ellsbury's fate seems to be in the hands of his MRI coming up. In being the optimist that I am, my hope is that he will be back very shortly after these 15 days are up.

In the meantime, the Yankees have announced that they will call up our very own, and former top prospect, Slade Heathcott! A left hander throwing and batting, Heathcott has enjoyed a dramatic turnaround in AAA Scranton as he is finally completely healthy. Heathcott is hitting to a slash line of .285/.335/.358 with 1 HR, 17 RBI's, 4 2B's, 2 3B's and 5 SB's in 37 games.

It is interesting that the team favored Heathcott over a guy whose popularity is also growing in Ramon Flores. Flores is hitting .281 in 34 games.

As Heathcott is not yet on the 40-man roster, an additional move is necessary to bring him into Pinstripes, so it is likely that Chase Whitley will be moved to the 60-day DL after announcing his choice to have Tommy John Surgery. Therefore, a spot on the Yankees 40-man roster will open up.

We offer a congratulations to a well-deserved call up for Slade Heathcott! This couldn't have come to a better guy and we wish him the best of luck in his time in Pinstripes. We also wish Jacoby Ellsbury a full and speedy recovery.