Implications of Chris Martin’s DL Stint Down the Road

By Chad Raines - May 11, 2015
So Yankee fans, I am sure that you’ve heard the recent news that Chris Martin is headed to the 15-day disabled list with right elbow tendonitis. This comes at an incredibly interesting time for the 28 year old in his first season with the club. However, it is quite possible that this injury may end up leading to a myriad of possibilities down the road for the team. 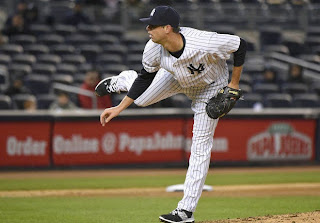 Ironically, just after Yankees manager Joe Girardi stressed the point that his bullpen needs rest, one of the more used pitchers on the team, Chris Martin heads to the disabled list. At the time of his injury, Martin had pitched the second most innings out of the pen behind Dellin Betances with 12.2 IP. By no means do I believe this is a fake injury whatsoever, but this certainly allows Girardi to use other options in Martin's absence.

With tendonitis, Martin should be back shortly after his DL stint barring he undergoes protocol of ice, pain medicines, light tossing, to bullpens, then back to game situations, etc. Even then, he may require another 15-day DL stint to ensure he’s completely healthy upon returning to the mound. In his immediate DL stint, the Yankees have recalled right-hander Brandon Pinder. I’m not necessarily a big fan of Pinder as he doesn't have a high ceiling but he’ll have the attempt to showcase his stuff once again before the club potentially moves onto another triple-A pitcher.
On a positive note, the Yankees have an abundance of pitching depth in AAA with multiple pitchers nearly MLB-ready. Obviously, the Yanks believe Pinder is ready, but the Yankees also have many minor leaguers available. RHP Bryan Mitchell appears to be on the cusp of reaching the 25-man roster with a 4.26 ERA in 7 starts in AAA. The team also has RHP Jose Ramirez (3.12 ERA in AAA), RHP Nick Rumbelow (5.28 ERA in AAA), RHP Danny Burawa (2.25 ERA in AAA), LHP Matt Tracy (4.50 ERA in AAA) and LHP Jacob Lindgren (more on him below).

With left-hander Jacob Lindgren and others on the precipice of joining the Yankees major league roster, Pinder’s time in Yankee pinstripes may be as short lived as his stint with the team was in his first go-round when he made only 2 appearances throwing 2 innings allowing no earned runs. Now, if I was a betting man, I would put money on the fact that if Pinder struggles (or even if he does not) him or Matt Tracy will be designated for assignment to make room on the 40-man roster in favor of the Yankees big name prospect Lindgren.

Lindgren has been lights out in AAA this season owning a record of 0-1 with an ERA of 1.88 and 2 saves in 11 appearances (14.1 IP). The former second round pick was arguably the Yankees most major league ready prospect coming out of Mississippi State in 2014 with a fastball in the mid to upper 90’s and a devastating slider (Andrew Miller-esque). Lindgren eased his way through the Yankees minor league system going from rookie league all the way to AA Trenton before the conclusion of the 2014 season. His success last season led him to starting this season with AAA Scranton Wilkes-Barre.
The problem with calling Lindgren up is it could cause an overload of lefties in comparison to righties in the bullpen. With Chasen Shreve, Justin Wilson, Andrew Miller and Lindgren, Girardi may feel as though he has one too many left handers in comparison to his right handers which will be composed of Dellin Betances, David Carpenter, Chris Martin (depending on what happens to him after his DL stint), Esmil Rogers many others. Fortunately for Girardi, he’s been looking to have a pocket of lefties in his arsenal for a few seasons now, but it may be put into question as to how many Girardi believes is an ideal number.

Another thing to keep an eye out for is the return of left-hander Chris Capuano which will almost surely knock Chase Whitley either to the bullpen or back down to AAA. We just cannot be sure that Capuano will go straight back into the rotation or if he works out of the bullpen for the team, though, but Whitley may take the unfortunate fall. Capuano currently owns a 1.04 ERA in AAA in 2 appearances (8.2 innings) as his rehab stint continues. And even further down the road, Masahiro Tanaka will return causing even more speculation about the rotation and bullpen.
The point is, for the first time in quite a while, the Yankees have a surplus of talented arms in the rotation and bullpen. This is not a bad thing whatsoever as it allows lots of flexibility with the minor league clubs (particularly Scranton Wilkes-Barre but even in Trenton as well) and on the major league level. But in order to straighten out the abundance of arms, I would expect a left hander and possible a right handed pitcher to be moved at some point probably for a plus hitter and some prospects once Martin, Capuano and Tanaka return from the DL. And don't count out the possibility of seeing some of these previously mentioned young-gun arms in Yankee pinstripes in the near future.