By Chad Raines - June 21, 2015
After Joe Torre’s departure following the 2007 season, I sensed our years of being a perennial championship contender were slowing dwindling to an end. This became especially apparent after the obvious choice to replace him, Don Mattingly, was denied the managerial opportunity. Something didn’t feel right about Girardi from the beginning. 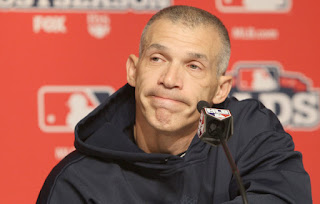 That sour feeling of mine proved to be accurate after the Yankees missed the playoffs in 2008 for the first time since 1993. In light of the team’s resounding 2009 World Series victory, I began to feel optimistic about our new manager, however after the 2012 season that optimism quickly deteriorated.

The Yankees have now missed the playoffs for two consecutive seasons, and unless they drastically improve their performance this year, they may very well be on their way to making that three years straight, and fading away into oblivion, similar to the late 80s-early 90s teams. I understand all the guilt cannot be piled on the manager, however Joe Girardi and General Manager Brian Cashman (whom I will not trash in detail due to my word count) deserve substantial blame. Had “The Boss” still been alive, and piloting the ship, I’m almost certain we would have witnessed a managerial change.

A quick glance at the 2015 season is all the evidence one needs to see in order to realize Joe Girardi has got to go. I have personally kept a Joe Girardi loss list for this season (which I will furnish upon request), and I have counted a total of 11 loses which can be attributed to our incompetent manager. Whether it be completely mishandling his pitching staff, resting his players at the oddest of times, or his reluctance to realize certain players on his roster just flat out stink, Girardi has continually made horrendous decisions at the expense of our Yankees. Even the most ardent Girardi defenders will admit that some of the things he does really make you scratch your head.
Let me begin with the starting rotation. I can name three loses alone this season (against DET, OAK, and BAL), where CC Sabathia has been on the mound for far longer than he should have been. I don’t think Joe Girardi has a calendar on hand, but I’m sure he realizes this is no longer 2009. Sabathia is mediocre at best, and Girardi’s inability to accept this basic fact of life loses us games. I understand that due to contractual obligations Sabathia has to remain in our starting rotation, however it is the manager’s responsibility to realize when certain pitchers need to be removed from a game.

The same can be said for Nathan Eovaldi. Let’s face it people, Eovaldi is a hit machine, and there’s a reason both the Marlins and Dodgers gave up on a young pitcher with such great potential. When Eovaldi gets hit, he gets hit HARD. As displayed in our losses against the Nationals in Washington, and more recently against the Marlins, Girardi doesn’t realize that, considering he left Eovaldi in the game for far too long.

Perhaps the worst of Girardi’s have been his handling of the bullpen. The amount of times he has inserted David Carpenter, Esmil Rogers, or another reliever into a pivotal moment of a game is mind-blowing. Believe me, I understand that outside of Dellin Betances and Andrew Miller, Girardi doesn’t really have that many options to work with, but his continued desire to have faith in the two aforementioned relievers, Chris Capuano, Chris Martin, or whoever else Cashman brings in from the weekly dumpster dives really makes me questions his competence as a manager.

Now, I think everyone realizes that position players don’t play in every single game anymore. The days of Cal Ripkin’s consecutive games played streak are long over. Girardi picks the quirkiest times to rest his player, whether it is A-Rod, Ellsbury, Gardner, Teixeira, or any other starter. I also don’t understand how with the game on the line, Girardi refuses to insert these players into the game as pinch hitters, or defensive replacements. We saw this twice with Teixeira, and one of those times it cost the Yankees the game. During an April game in Toronto, with the Yankees leading 1-0, Girardi elected to keep Garret Jones at first base, instead of inserting Teixeira as a defensive replacement. Guess what happened in the later stages of the game. Headley made an outstanding stop, but Jones couldn’t handle the throw, and as a result the Yankees lost. Girardi defenders may view this example as purely anecdotal, and it is, however it also paints a larger picture of how Girardi manages games.

All of the Yankees struggles over the past few years cannot be blamed on Girardi, however he deserves much of the blame, along with GM Brian Cashman. If the Yankees miss the playoffs for a third consecutive year, and a managerial change is not made, I will officially lose all confidence in this first-class organization. Other teams fire their managers and general managers for mistakes, but the Yankees, on the other hand, reward them with extensions.