By Chad Raines - June 18, 2015
As was the case with the Yankees in 2014, injuries have gotten the best of the 2015 Yankees up to this point. Luckily, the injuries have been fewer and farer between in 2015, but the point remains – we have yet to see this Yankee team completely healthy. And the fact that a battered Yankee team is in first place goes to show that a healthy roster presents a dangerous team not only in the division race, but the pennate race as well. 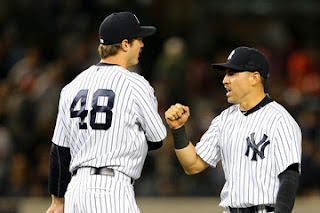 Aside from Chase Whitley being victimized by the torn UCL and Tommy John Surgery epidemic, the Yankees have been fortunate enough that hardly any injuries suffered to this point have jeopardized a player’s season. The players highlighted by injuries this season who have since returned include Masahiro Tanaka (forearm), Chris Capuano (groin), Brendan Ryan (calf), and Chris Martin (elbow). A few others are expected to return sooner than later including Andrew Miller (forearm), Jacoby Ellsbury (knee), Ivan Nova (elbow) and rookies Jacob Lindgren and Slade Heathcott (quad).

Of the list above, Capuano and Ryan haven’t made a major impact since returning, but if Brendan Ryan hits the ball well, he could pressure the Yankee front office to send Stephen Drew packing. With Capuano struggling, he may fear for his job with the return of Ivan Nova, but with Jose De Paula recently called up, I see De Paula being optioned before Brian Cashman moves Capuano.

On the flipside, Masahiro Tanaka has been nothing short of great since returning from the disabled list. Tanaka has strengthened his case for being considered the ace of the staff going 2-1 with a 1.71 ERA and 21 strikeouts in 21 innings since returning.

In the bullpen, Chris Martin has provided right-handed help which has been scarce at times for the club. With the potential rise of Sergio Santos, we should watch out for who tends to get the ball in more pressure filled situations going forward for the Yankees.

There isn’t much to say about what the healthy Andre Miller meant to the ball club. Converting all 17 of his save opportunities with a 1.03 ERA, Miller had a strong case of being the best closer in the MLB before going down with an injury.

With the lethal combination of Dellin Betances in the eighth and Andrew Miller in the ninth, the two headed monster “DnA” was able to essentially shorten games to 7 innings, barring the Yankees had a lead as the game might as well have been over when they took the mound. Getting Miller back will once again solidify the backend of the bullpen translating to more wins for the Yankees.

At the top of the lineup, Jacoby Ellsbury was enjoying one of the most successful seasons of his career before being injured as he was certainly in line to becoming an All-Star although thanks to Royals fans, he likely wouldn’t have been a starter. Ellsbury was hitting a career best .324 with an on base percentage of .412 having stolen safely in 14 of his 19 attempts.

Ellsbury’s presence at the top of the lineup with the speed threat of him and Brett Gardner went unmatched by most teams. Gardy was also thriving with Ellsbury as it put less pressure on him and the rest of the team. When Ellsbury comes back at what we hope is the end of June, the team should instantly begin putting up more runs.

Rookie outfielder Slade Heathcott played just 6 games before going down with an injury but after hitting .353 in those games, he certainly opened some eyes. It’ll be interesting to see what the Yankees have in store for him with his return but as a player who exhibited a lot of plus tools, it’ll be tough for the Yankees to send him back down to Scranton which could prompt a trade.

Jacob Lindgren didn’t come to the Bronx quite as he was advertised in large part because of him hiding an injury that had been nagging him. He had an ERA of 5.14 in 7 MLB innings but to reiterate the point, his competitive fire forced him to push through his injury that he kept hidden until he was sent back down. When he gets healthy and is back to dominating triple-A hitters, he may find himself back in the Bronx at some point in July or August.

And finally, the return of Ivan Nova is the one many of us are highly anticipating. Nova has been a force in the rotation when healthy as he’s shown flashes of being the most consistent starter our rotation has had in year’s past. Nova will be making one more rehab start this Friday before he presumably returns to New York. He could start next Saturday, June 27 in Houston.

The return of Nova instantly makes the rotation better as he’s likely to bump Adam Warren back to his more comfortable confines of the bullpen where he thrived in 2014 with a 2.97 ERA. Returning from Tommy John poses many question marks for the 28-year old right-hander but he’s looked sharp in his minor league action. If he returns to form, the trio of Tanaka, Pineda and Nova will surely be the best in the AL East.

Let’s also not forget about other prospects that are on the verge of reaching the MLB including UTIL Jose Pirela and OF Ramon Flores (once again), 2B Rob Refsnyder, and pitchers Luis Severino, Nick Rumbelow, and Danny Burawa amongst quite a few others.

The return of crucial players to this year’s Yankee team is going to be highly welcomed by all. In the event that the Yankees get everyone back healthy and make a few trade deadline moves to beef up the roster, there is a good chance the Yankees will return to playing baseball in October.