By Chad Raines - June 30, 2015
I don't know you much but I woke up feeling like I wanted to stir you up. Let us all escape reality for a moment and enter the portal of anarchy. If you're an employee let's pretend your boss is out of town and crank up that music. You are married with kids but they left town so go ahead and pee with the door open. You live at home and your parents just caught a cab to the airport so go ahead and finish uploading that picture of the empty house on Instagram. Whatever your scenario is, it's time to eat some forbidden fruit.

After we celebrate our temporary freedom, blurry lines transition our space into a scene out of an Arnold Schwarzenegger movie. You know the kind. That hidden room located on the other side of his walk-in closet that reveals a glorious amount of weapons. He bypasses the grenades, machine guns and even big Bertha that shoots actual nuclear missiles. The knives that can cut a deer in half, nothing disrupts his focus. His tunnel vision leads him to the stand up cabinet located at the far end. He begins to turn the dial. Though he often never does, he remembers the combination like a scarred memory of the past. Finally the door is unlocked; he slowly opens the door and reveals.....Luis Severino. 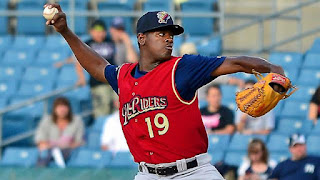 He is the diamond in the rough. That special "save it for a rainy day" thing we have under our mattress, in the fridge or in the bank. He is the Yankees number one prospect. Joel Sherman wrote an article reporting how one scout mentioned "there is zero doubt that Severino is better than guys who are in the Yankees rotation now." He reported another scout stating "He’s got No. 2 upside and should at least be a quality No. 3 starter." Yet Severino stands behind a glass in the minor leagues that reads "break in case of emergency".

If we have respectable scouts commentating so strongly on this prospect than I'd like to ask you a rhetorical question. How many base runners heading to first base would be considered safe if first base was 89 feet away as opposed to 90? In the grand scheme of things 1 foot seems relatively small but when factoring baseball and base runners we talk about rallies that could have been.

As it stands right now, the American League East holds no wiggle room. Besides the Red Sox, every team is clawing for first place. As the Yankees have been trading positions with the Rays, the Orioles have risen and taken possession of first place by mere percentage points. While the fight for AL East supremacy continues, Luis Severino is pitching a line of 3 wins with zero losses, a 1.73 ERA, 24 strike outs in 36.1 innings of work. Although I am only sharing his recent work since being promoted to AAA, to me it does seem to translate into that difference between 89 and 90 feet. Severino can be a difference maker.

For all you conservative folks who don't have an adventurous bone in your body and forgot to read that Schwarzenegger paragraph with dramatic music in the background, I will share my rebuttal to your reserved ways. Since 2006 there has been a steady decline of league batting averages. In only our 87th day of the 2015 MLB season we have seen 2 no hitters and 16 cases of close encounters with pitchers reaching 6 innings or more of no hit baseball. I'm not trying to undermine the quality of hitting in the Majors but if you were looking for a soft spot for Severino to land on, look no more.
Our movie is coming to a close, the anarchy is fading. There you sit with pen in hand, cell phone beside you and no one to hold you responsible. What's your move....