By Chad Raines - June 28, 2015
After just 1.1 innings pitched, 4 hits allowed and 6 earned runs and 2 home runs allowed, Houston Astros starting pitcher Brett Oberholtzer had been ejected. His ejection came after blatantly throwing inside with the intention of hitting Alex Rodriguez after serving up a 2-run home run to Chris Young. Clearly frustrated, Oberholtzer was tossed without warning or arguing. 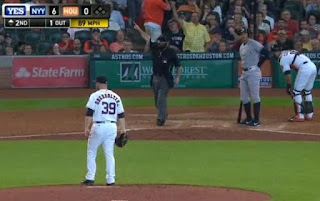 Just hours after his ejection, the Houston Astros made a bold statement optioning Oberholtzer to triple-A Fresno. Astros manager A.J. Hinch was clearly on board with the move as his embarrassed remarks in the postgame reflected that.

Hinch began by repetitively stating that he was “disappointed” in the shenanigans that went down in the second inning. Hinch was deliberate in ensuring that Joe Girardi and Alex Rodriguez know that the actions of Oberholtzer are “not how we [the Astros] operate.” Hinch went on to say that there was “No place in our game for that kind of activity.”

“I think the umpires handled it very well. I think they calmed the masses down, they issued the warnings, there were no issues beyond that,” Hinch said. When asked about warnings issued before the game, Hinch continued by saying “We have no problem, they have no problem. I don’t think there’s any problem moving forward.”

On the other hand, Joe Girardi went on to say, “I think it’s a kid getting frustrated. I definitely think he threw at Alex. You don’t want to see that, but we’ve seen it before and you just move on.”

Clearly, Hinch was not happy about the actions of his starting pitcher as us Yankees fans weren’t too fond of them, either. Girardi seemed unhappy about it as he should be but the situation appears as though it won’t escalate in the season finale. The Yankees also showed real class in not retaliating which could’ve been easy to do in a 6-0 game.