By Chad Raines - June 29, 2015
Following a 13-26 week at the plate (.500) with a .581 on base percentage, and an .885 slugging percentage, Brett Gardner was rewarded with the American League Player of the Week honors. Gardner also slugged two home runs, four doubles and drove in nine runs. This is Brett Garnder’s third Player of the Week award in his career as he is on a tear at the plate. On the season Brett Gardner is hitting to a slash line of .300/.373/.493 with an OPS of .866. He has nine home runs, 39 RBIs, 19 doubles, three triples and 15 stolen bases in 18 attempts. I don’t know about you, but that sounds pretty All-Star worthy to me. Click the link below the vote!
http://mlb.mlb.com/mlb/events/all_star/y2015/ballot.jsp?tcid=ASG15_mlb_navlink 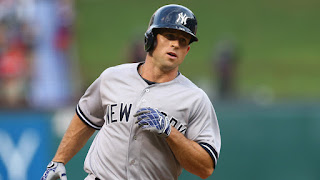