By Chad Raines - June 07, 2015
As one of the hotter teams in baseball, the Yankees are enjoyed a 6-1 record this week. After dropping the season finale to the Oakland Athletics May 31, the Yankees then swept the Seattle Mariners in three games before getting a day off and sweeping the Los Angeles Angels in 3 games. With timely hitting and pretty good starting pitching, the Yankees are stepping toward more consistency as they extend their first place lead over the Rays and the rest of the AL East. Let’s take a look at the state of the team. 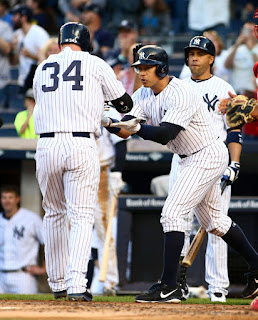 Alex Rodriguez is just 9 hits away from 3,000 in his career. Before the season, we figured he’d reach that milestone, but probably not before the All-Star break! He’s one of the hottest hitters on the team as he continues hitting out of the 3-hole in the lineup.

We’d like to say that Stephen Drew is heating up – but the numbers don’t lie – he’s not. With a huge 2-out, 2-strike hit to tie the game in the top of the ninth inning in Seattle, then a two homer game in game one against the Angels, I will say his confidence has likely increased. Despite his key hits this week, he’s still hitting just .135 over his last 10 games (5-37, 2 HRs).

The highly anticipated return of Masahiro Tanaka was simply majestic. In activating Tanaka, right-hander David Carpenter was designated for assignment. In what Carpenter called “surprising,” it was unfortunate he couldn’t get into a rhythm this season because I was excited for him coming into 2015. However, with Chris Martin returning soon, I don’t question the move too much, and hopefully Tanaka can continue dominating.

Garrett Jones is quickly heating up and showing off the good hitter that he is. After hitting .185 in 27 at bats in April, he then hit .276 in 29 at bats in May and is off to a hot start in June with a batting average of .444 in 9 at bats with 2 home runs. He hit a huge, game winning home run in the top of the 11th in Seattle June 2 before hitting a 2-run homer the next day that was the difference in a 3-1 Yankees win. Hopefully he can get more at bats to continue his hot streak.

Mark Teixeira is on a ridiculous pace of 45+ home runs and upwards of 125 RBIs. Now, he likely won’t get there but he's hitting .237 with 17 home runs and 45 RBIs through 54 games this season. He’s certainly a Comeback Player of the Year candidate with his bat and stellar defensive play. It wouldn’t be surprising if he sneaks onto the American League All-Star team as a power bat of the bench for the Mid-Summer Classic.

Jacoby Ellsbury is still trying to come back from his knee injury as soon as possible. Working hard, Ellsbury is testing it and running poles in Yankee stadium in an attempt to return to the big league club this month. He’ll likely need a rehab stint in the minor leagues before coming back up, but look for him to return roughly two weeks before the All-Star break.

Dellin Betances allowed his first earned run of the season (tears). It came in the Yankees 8-7 win where they almost blew an 8-1 ninth inning lead but Betances was able to get out of it just allowing 1 earned run. His ERA sits at 0.30.

Adam Warren has gotten into a rhythm. He has lowered his ERA in every single start since May 3. If he keeps pitching the way he is, it’ll pose an interesting decision for Joe Girardi to make regarding the rotation when Ivan Nova returns.

Jose Pirela is swinging a hot bat. After going 2-3 in the series finales with the Angels with a double and his first career home run, Pirela is now hitting .268 on the season. The potential of Pirela playing the first seven innings getting 3 at bats before giving way to Stephen Drew for defensive purposes may bode well for the immediate future of the team.

Esmil Rogers has pitched for lack of a better word – terrible. In the same game Betances allowed an earned run, Rogers didn’t record a single out, allowed 4 hits, 5 earned runs and 1 walk. That pushed his ERA up to 6.39 and his ERA over his last 10 outings is a dreadful 11.05. Yankee fans cringe when he comes out of the bullpen nowadays and with players returning from injury, his time in pinstripes is almost undoubtedly limited.

In Yankees MiLB news, the Scranton/Wilkes-Barre RailRiders are 32-26 on the season, just a half game out of first place in the International North division. Riding a 6-game winning streak, the RailRiders have been led by leadoff hitter Mason Williams (.324 BA), 3-hole hitter Rob Refsnyder (.279 BA, who hit a home run today) and Ben Gamel who is hitting .320. Jose de Paula has an ERA of just 0.82 in 2 starts with the team and top prospect Luis Severino has a 2.38 ERA in two starts (11.1 IP). Bryan Mitchell is 4-4 with a 2.86 ERA in 11 starts.

The Trenton Thunder are 33-24 riding an 8-game winning streak as they are just a half game out of first place in the Eastern League standings. Jake Cave is hitting .294 while Eric Jagielo is hitting .286. Top prospect Aaron Judge is hitting .284 with 8 home runs, 31 RBIs and 13 doubles in 51 games. Greg Bird is coming off an injury and is hitting .240 with 3 home runs and 15 RBIs in 28 games played. Brady Lail is 4-2 with a 2.28 ERA in 11 starts with the team while Mark Montgomery has held down the back end of the bullpen with a 1.80 ERA and 7 saves.

Tyler Wade is hitting .294 in 50 games with the Tampa Yankees who are getting pretty good pitching throughout. Their record is 29-27. Jorge Mateo, at just 19 years old, is hitting .272 in Charleston with 38 stolen bases in 49 games. The RiverDogs are 28-28, so the farm system as a whole is doing fairly well.