By Chad Raines - June 22, 2015
After splitting a 4-game set with the Miami Marlins losing both in Miami but winning both in the Bronx and taking two of three games from the Detroit Tigers, the Yankees finished this week with an overall record of 4-3. Let’s take a look at some Yankees MLB and MiLB updates from this past week. 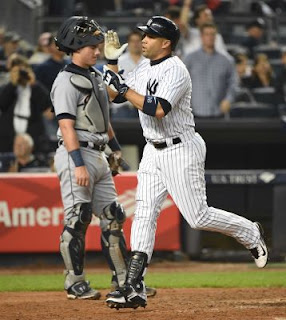 Alex Rodriguez recorded his 3,000th hit on Friday in what was probably the biggest Yankee news of the week. Rodriguez did it on a first pitch fastball against Tigers pitcher Justin Verlander in a ball that reached the right field seats. A-Rod became the 29th member of the 3,000 hit club and it was a memorable moment for the fans. Rodriguez then turned around and hit another home run in the next game for hit number 3,001. 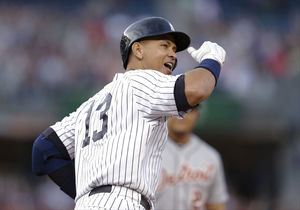 I normally put the MiLB news at the bottom, but this is too important for me to place at the bottom. One of the Yankees top prospects, the 6’7” 275 pound outfielder, Aaron Judge will be setting up court in triple-A as he was just called up to the Scranton/Wilkes-Barre RailRiders on Sunday. Judge hit to a slash line of .284/.350/.516 with 12 home runs, 44 RBIs and 16 doubles in 63 games with the Trenton Thunder. Ivan Nova pitched in what was likely his final rehab start. Nova struggled a bit pitching 5 innings giving up 7 hits and 5 runs all earned. He struck out 4 and walked 2 and was tagged with the loss. Despite his less than stellar outing, expect to see Nova in a Yankee uniform this week as he’s returned to the dugout and will likely return to the mound in Philly.

Carlos Beltran hit 3 home runs this week including two in one game and raised his batting average from .244 to .252. After hitting .298 in May with 4 home runs, Beltran is hitting .292 in June with 3 home runs as he is catching his strides at the plate.

The Yankees outfield situation has been an absolute mess since the Jacoby Ellsbury injury. Ellsbury’s replacement, Slade Heathcott was injured after striving hitting .353 in 6 games before Ramon Flores was sent down to triple-A after 9 games (.269 batting average) in the MLB. His replacement, Mason Williams then landed on the DL after hitting .286 in 8 games with the big league club prompting the Yankees to bring Flores back up.

After struggling in his Yankee debut, Sergio Santos got out of a bases loaded jam, no out jam in Miami without allowing a run after looking dominant striking out the first two batters he face. His reward for his stellar outing? A torn ulnar collateral ligament in his elbow requiring Tommy John Surgery. It is unclear whether Santos will pitch for the Yankees again as he definitely isn’t returning this season.

The Yankees bullpen has also been a mess with newcomers coming and going. This week alone we saw Chris Martin and Jose Ramirez optioned to triple-A with Brandon Pinder and Jose De Paula being called up. Bryan Mitchell was then called up as Santos was injured only to be sent back down two days later for Danny Burawa. After making their major league debuts in Yankee Stadium on Sunday, Burawa and De Paula were both optioned to triple-A as the Yankees recalled right-handers Diego Moreno and Nick Rumbelow from triple-A Scranton.

With Ivan Nova coming back, there will have to be a corresponding roster move which should be interesting. Is Chris Capuano’s time as a Yankee all but over with or will the Yankees simply option one of the newcomers (Moreno, Rumbelow, etc.) just added to the roster? With Sergio Santos going down, a 40-man roster spot is open potentially protecting Capuano so I would assume the Yankees will option a recently called up pitcher to make room for Nova on the 25-man roster.

Jacob Lindgren will undergo elbow surgery a few days after being optioned to AAA and placed on the disabled list. The injury will likely keep him out until August so we probably won’t see Lindgren in Pinstripes again until September.

Didi Gregorius is hitting .274 in June with 2 home runs as he’s seen his batting average and spot in the lineup climb. We’ve seen Gregorius hit second in the lineup at times and anywhere from sixth to eighth this month. If he can get going at the pace he’s hitting in June, that’ll be a huge boost for the team offensively.

Luis Severino pitched 7.2 innings on Sunday for the RailRiders allowing 4 hits and 2 runs, both unearned. He was dominant as he didn’t walk anyone and struck out 7 hitters. He moved his record to 3-0 in AAA and his ERA now sits at a mere 2.15. He continues mowing down minor leaguers which is very exciting for Yankee fans alike.

Jose Pirela and Gregorio Petit still haven’t appeared to be taking being optioned to triple-A too kindly. Pirela is hitting .316 in 13 games in Scranton while Petit is hitting .480 in 7 games in SWB.

Chasen Shreve has continued pitching outstanding as his ERA is now under 2 at 1.95. He has yet to allow a run in June in 7 appearances (7 innings).

Stephen Drew has his third 2 home run game of the season on Sunday and has raised his batting average to .188 which is approaching a season high. He now has 11 home runs this year in one of the most bizarre stat lines I’ve seen of any major leaguer ever. He’s hitting .267 in June with 6 home runs.

Dellin Betances’ ERA at 0.25 is lower than his age (27). I don’t recall ever seeing a pitcher with as many innings as he’s pitched with an ERA lower than his age so I figured I’d share another angle of his dominance with you. He’s struck out 57 batters in 35 innings.

Andrew Miller and Jacoby Ellsbury are both making strides in returning to action. Ellsbury may be looking at a short minor league stint this week as he’s returned to baseball activities before rejoining the club at the end of June or first week of July. Either way, I’d expect Ells to be back before the All-Star break. Miller may not be back before the break but his return will be much needed after the break so we hope to get him back soon.

Article by: Chad Raines
You can follow me on twitter @Chad_Rain
Keep up with our blog on twitter @BronxBomberBlog for the latest Yankee news, analysis, updates, live game tweets, opinions, humor, MiLB news and all things Yankees!
Bulletin Chad Raines