By Chad Raines - June 16, 2015
I could spend my day avoiding social media, and avoiding a Yankee game. I could go straight to the Joe Girardi report and easily know who won the game before Bob Lorenz guides us through the night's highlights. If you play poker against Joe Girardi you shouldn't have a hard time taking his money. He's as obvious as the day brings light. 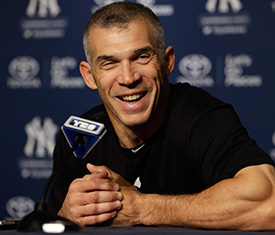 When he wins it's nothing but a mouth full of braces. His cheap attempts at comedy are followed by the shameless chuckles at his own jokes. It's good to be alive. He will emphasize and repeat anything you want. Nothing can bring him down. He's bright eyed as he looks around the crowd of reporters. He might even close his eyes while answering a question, scanning his brain ever so thoroughly for the best way to convey his thoughts.

When he loses there is a huff in his breathing as though he is trying to exhale the weight of the world. Is our economy going through another recession? No, but the Yankees lost another game. He will cut you off mid question with a snap answering what he assumed your question was going to be as he lays back on his chair breathing heavy and looking angry as though his wife forgot to pack his asthma pump.

Maybe I have a weird sense of humor but I just have to laugh. Better to have laughed and moved on than to sulk at a Yankee loss. Better yet, I feel like Girardi has grown on me. I'm not saying he's the best that ever lived but it's not like I'm looking at Buck Showalter and wondering why the Yankees didn't push for him. Not anymore at least!

From Arnold Schwarzenegger's "I'll be back" to Stone Cold Steve Austin's "And that's the bottom line", it's been simple sentences such as those that have become cultural phenomenon throughout the years. Amongst the many things Girardi has accomplished in his Yankee managerial career, his catch phrase is that of which will live on even after he is no longer managing the Yankees.

Simple yet effective. There must be some marketing genius out there with a t-shirt design. 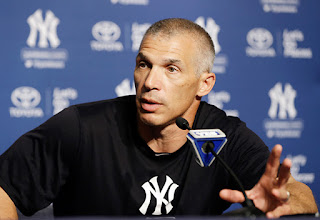 Besides all the hoopla you have to admit Girardi has done an exceptional job with what he's been given. As the manager of the Yankees he owns a respectable record of 682 wins and 514 losses for a .570 winning percentage. By the time his current contract expires he will have tenure of 10 years as manager. That’s not easy to do in baseball and as history has taught us, even more difficult to do in the Yankees organization. Of course he hasn't had the success of his predecessor but I'm not even sure Joe Torre could have gotten more out of those teams.

I especially learned to appreciate Girardi while watching the postseason last year. As Ned Yost led his red hot team through the playoffs, there were many questionable moves Yost made. If there is one thing that annoys me about Girardi, it is his conservative ways. But I could not help but think of him in the postseason and know he would not have managed like Yost did. This is how I know I have truly accepted him and why I have faith in the future of the Yankees.