By Chad Raines - June 05, 2015
Let's stop beating around the bush and just admit the obvious. It is not easy being a Yankee fan. Gone are the days of an automatic trip to the post season. Also gone is the perseverance which once defined this team I love. But regardless of their performance or lack thereof, they are still my team. Win, lose or draw, I bleed Yankee blue. So when the team you love gives up a 10 spot in only the 3rd inning, how do you resist the temptation of shutting your TV off by throwing the remote at it? Allow my tears and frustrations to serve as a guide on how to keep your reputation as a Yankee fanatic intact. To witness 10 runs scored on your team so early can no doubt make the game feel painfully long but with this guide I can assure you that you can pull through. 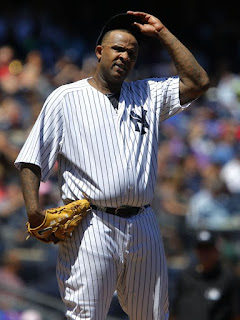 The voice of therapy
Once you are done updating your social media account with every expletive that fits the scenario, your first step in this guide is to mute your TV. No disrespect to Michael Kay what so ever as I find him to be extremely entertaining but at this point of a game, we need to therapeutically overcome our strong urges. Next what you need to do is find a radio and put on the commentary of John Sterling while continuing to watch the game on TV.

Now those of you who have never heard this man do commentary are in for a treat. Nothing says humor like John Sterling calling a game for which the Yankees are getting pounded. First, let's set the stage. Before the first pitch is thrown we have Suzyn Waldman flying solo, prepping the audience for the game. As my wild imagination would have it, I can only see John in the background, sitting on a recliner. His pants are off of course to prevent from getting creases or wrinkles before game time. He has two girls in bikinis on each side of him, fanning him with freshly picked leaves from a palm tree. With Fiji water in hand, he has a third girl in a bikini feeding him grapes. As the pitcher finishes his warm ups, Suzyn wraps up with the same words she says before every game "And as (insert leadoff hitter here) steps up to the plate, stepping up to the microphone is the voice of the New York Yankees, John Sterling."

Now that this glorious ritual has ended and we see the Yankees getting pounded away, we find John in vintage form. What makes John so funny is the fact that there is no bigger Homer than him and the fact that he has to talk about the game to millions of listeners while he gets into an obvious bad mood is sure to make you feel better. I often read the tone of his voice as someone who is trying his hardest not to curse on air after every bad play or run scored against the Yankees. It's as if he was battling a bout of turrets syndrome. You will be sure to hear his classic self soothing lines such as "how about that" or "you can't predict baseball Suzyn"

Cheer for your favorite player
At this point in a game, it is perfectly fine to think that there is no hope for the Yankees as a whole. Not to say you have no faith in your team, but much like in any season of 162 games, you are bound to run into a bad one. This is when I focus my attention on Brett Gardner. As the lone home grown Yankee, I have noticed in him the ability to spark a crowd. With speed on the bases or on the field and the ability to get an exciting hit when you weren't expecting it, he still adds entertainment value to a lousy day at the park.

Pretend to be a Steinbrenner
How would you fix this team? Who would you trade for? More importantly (to me at least) how would you fire Brian Cashman? Now I must make clear that the thoughts and opinions expressed by me about Brian Cashman are solely mine and not of the Bronx Bomber Blog site as a whole. But if we by chance are in agreement than cyber high fives all around. I am a patient person, sometimes to a fault. That is why it took until last year for me to start calling for Cashman's head. The fact that I am still a Yankee fan after enduring years of his stupidity only proves that my allegiance to this team runs deep. In my opinion if the Yankees are to truly get better, they need to get rid of him.

It's my hope that you'll never find yourself in a situation where you need to use this guide again. But in case of an emergency, Bronx Bomber Blog is here for you.