By Chad Raines - June 27, 2015
Yankee Stadium can be a loud place. I'm not familiar with the acoustics of the ball park but I do know a thing or two about those who occupy it. We are passionate with a high volume and the mute button broken. You ignite us and so help us God, we'll make the weather turn on you. But I feel like the stadium's full potential has not been realized. 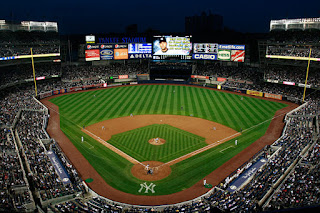 I've read from many former ball players how at times the old Yankee Stadium use to shake. You couldn't hear the music through the PA system let alone the person next to you. It was like the 10th person on the field for the home team and a true factor of intimidation. Derek Jeter in his speech after the final game in the old Yankee Stadium said how he hoped we would bring the memories of the old stadium into the new one and pass them on from generation to generation.

So why does it feel like some of these crowds have amnesia? Where did the ferocity go?

It went towards our rent, our car payments and other responsibilities. To paraphrase a past trending quote, the prices of tickets are too damn high. In order to get a decent seat located by the infield you would have to pay in the hundreds of dollars. That's not exactly ideal when you are trying to take out your family for their first ever game on Father's day. For those of you saying how there are cheaper seats available and how any seat in Yankee stadium is a good seat, let me just say this.....you might as well be waving a tiny American flag on one hand and have a "peace" sign on the other because that is one of the most diplomatic things I have ever heard.

Tell me again how great it would be for me to take my 3 year old daughter to the outfield where even in words of encouragement and affirmation, expletives are yelled out. Or how the ratio for a fight breaking out due to a Red Sox fan trying to attract heat on himself is about 1 per 3 innings. I'm not saying there's anything wrong with that atmosphere. We are New Yorkers for crying out loud. I'm just saying that I'm trying to be a responsible adult.

Apparently being responsible can be expensive. I didn't expect to have to open up a Kickstarter account in order to give my daughter a great experience.

In my journey to visit every major league ball park I found myself in Tropicana field a few summers ago. The Rays were playing the Yankees and I was about 8 rows away from the visiting dugout. As I sat there in disbelief the friendly Floridian who I had been talking to throughout the game asked me what was wrong. It's not that I wasn't enjoying myself. It was that I realized that the cost of a round trip plane ticket to Florida coupled with the cost of the ticket I bought for that game couldn't get me nearly as close a seat in Yankee Stadium. In my TV I trust.