By Chad Raines - June 07, 2015
So when was the last time any of you checked Esmil Rogers for an expiration date? Brian Cashman sure had an inkling of the sour milk that has been sitting on the pen as it has been reported that he is in the market for righty relievers come the trade deadline. 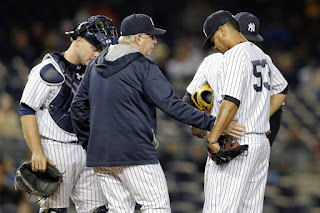 I was never excited about Rogers. Especially since he was carrying over the baggage of alarming stats as a 6.97 era in 20 2/3 innings when the Yankees first picked him up off waivers from the Blue Jays. Giving up 16 runs in less than 3 games worth of innings? Welcome aboard!

Cashman's astute planning brilliantly helps a 2014 team that can't score runs by giving them an arm that only knows how to give them up. The Yankees then decided to avoid arbitration and sign him to a 1 year deal to the joy of no one.

As much of a nightmare as last night's 9th inning was, I beg you not to forget it. As horrible as Esmil pitched I still have hope for him. Yes that's right, I said it! I have hope! My hope is that what we witnessed last night will serve as a trivia question to win a pair of Yankee tickets after he is designated for assignment.

Like the Dallas Bradens of this world I can only see Rogers’ future in baseball as that which will casually disappear and never be heard from again. Sure he was good enough to notch a win for us this year but as the saying goes, any squirrel can find a nut. As he is quickly proving, he is not a solution and he has become part of the problem. If you're wondering about the stench of spoiled milk in the air, one need only lift the foot of Esmil where the expiration date reads "Good until luck runs out."