By NYY v BOS - June 07, 2015
Andrew Miller was a signing most Yankee fans were rooting for this offseason. After a bidding war between the Pinstripes and the Astros, Miller turned down more money from Houston to put on said Pinstripes.

This alone was a welcome sight for Yankee fans as ex-Yankee closer David Robertson infamously told the media he wasn't offering any hometown discounts to re-sign with the Yankees before eventually departing for the White Sox.

Well, Yankee fans don't miss Robertson in slightest. The reason why? None other than Andrew Miller. 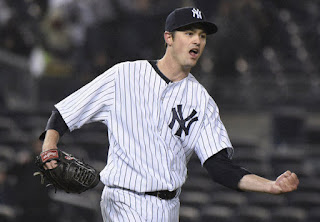 Note: Statistics may vary from time of writing
Miller has been what could only be described as absolutely dominant since joining the pinstripes.

For the longest time Miller was closer without a title, before eventually being named to the job officially a few weeks ago. In that role, Miller is a perfect 17/17 in save situations with a 1.04 ERA.

These numbers are absolutely outstanding and a huge upgrade over Robertson, who blew 25% of his career saves with the Yankees.

Miller has surrendered only three runs in 26 IP. All the while he's struck out 43 batters while only walking 10. That's a better ratio than a lot of starting pitchers and more total strikeouts than the Angel's Jared Weaver.

His ERA+ is a ridiculously high 370. To put it in perspective, league average is 100. Much of this can be attributed to his aforementioned ability to rack up K's and 3+ out saves.

In other words, Miller has been beyond filthy and stepped up big as the closer when Betances was struggling earlier this year and he unsurprisingly receives an A+ for a grade. The tandem between the two couldn't be any more perfect and so far Miller has easily been worth his contract. This article was short, but sweet as there's not much else that could be said about how good he's been. Here's to hoping for more saves and K's from Miller time.
Follow us @Bronxbomberblog
Featured Column Nick Scott Opinion