Hello Yankee fans! I'm back from an extended absence, for which I do apologize. I will no longer run a personal account, but I do intend to contribute articles on what I hope is a fairly consistent basis and this piece will be the first of a series in which I will grade each Yankee player based on their performance so far. The first player? First baseman Mark Teixeira. 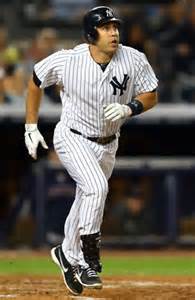 Note: These stats on Mark Teixeira were retrieved before the game today. Teixeira now has 16 home runs and all other stats will vary slightly from what is mentioned in the following article.

Before the season started, I wrote a pretty optimistic piece about Mark Teixeira in terms of making a prediction of his performance. True, I am biased towards optimism seeing as he's my favorite Yankee, but Teixeira's track record is that of an MVP caliber player when healthy, thus I banked on Tex staying healthy which would result in a return to his usual self.

Perhaps I'm smart or perhaps I'm lucky - maybe both - but Teixeira has been nothing short of tremendous this year and seems like he's been the best all around Yankee this year (Arod has been solid, but doesn't field and Ellsbury has missed games with injury).

Health has clearly been huge for the switch hitting slugger who has hit 15 home runs through 53 games which is a pace for 45 dingers by year's end. He is 6th in all the MLB and 2nd in the AL, only to Nelson Cruz, in this department.

Tex is clearly hitting for power in the homer department, but even more importantly, he's driving in runs. His 40 RBIs are 4th in all the majors and lead the American League. This is huge, as Teixeira has been finding a way to drive in runs which is crucial considering the team's offensive woes at times this season.

Teixeira has also been patient as ever as he leads the team in walks at 31. When this ability to get on base is coupled with his power so far this year, it's good for an OPS of .924 which is inside the top 15 in all the majors and the highest on the team.

The Sabermetic department has also been a fan of Tex's performance this year as Fangraphs rates his wRC+ (weighted runs created) at  rank 17 overall (just ahead of Mike Trout no less) in all baseball and Baseball-Reference has rated his OPS+ at 155, both very impressive.

Perhaps the one of the best stats to look at is his K-Rate which is a very solid 13.6%. To give you a reference point, Mike Trout's is 21.6% and Nelson Cruz is significantly higher at 25.7%. Long story short, Tex has kept his strikeout rate low by finding away to put the ball and play and this no doubt helps explain how he's been able to drive in so many runs.

His BABIP is a curious stat as it is actually very low at a meager .200. This suggests that he's actually been incredibly unlucky as far as getting hits on balls in play goes and suggests that if he continues his approach, his already respectable .242 average could improve quite a bit.
As always Mark has also been a Godsend in the field. Every game he's saving the defense an error by somehow wrangling in a rogue throw while managing to stay on the bag and he's a vacuum for any groundball hit his way.
It might sound like I'm simply throwing numbers at you and you'd be right. However, the point is that Tex is having an outstanding season in every important stat category possible and has been a top 25 hitter in all the league this season.
As mentioned earlier, Mark's best performance may be yet to come. Assuming his BABIP will rise some, Tex could be a real deadly tool for the Yankees if he stays healthy and maintains his ability to hit for power and drive in home runs.
In the end, I'm giving Teixeira an A+ due to the fact he's not only leading the team in most offense categories, but is also close to leading all of the MLB in said categories as well. Look for Teixeira to continue to mash this year and remain the important weapon the Yankees signed him to be.
Featured Column Nick Scott