How Much Longer Can the Yankees Realistically Stick with CC Sabathia?

By Chad Raines - June 25, 2015
After his latest beat down by the pathetic Philadelphia Phillies, the Yankees higher ups must be contemplating what to do with their former ace CC Sabathia. Most Yankees fans view every single CC Sabathia start as a likely loss. They do this because if the Yankees lose, which is the most likely result when he is on the mound, they will not be disappointed, and if they surprisingly win, then that win will be that much more satisfying. 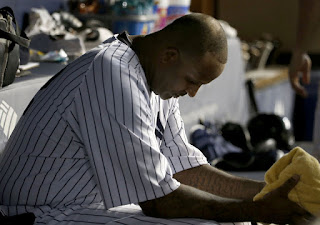 Before I disparage the man, I would first like to give him credit for what he has done for the New York Yankees. After signing a big money contract in 2009, Sabathia anchored our rotation from 2009-2012, when he posted a record of 115-29 with a 3.23 ERA. CC was an integral piece our championship run in 2009, along with our playoff runs the subsequent three years. As fierce of a competitor as CC is, his struggles dating back to 2013 really must be difficult for him to cope with, and he’s said as much. So, CC Sabathia, I appreciate everything you have done for this organization, but now it is time for you to go.

With Ivan Nova fresh off the disabled list, unless the Yankees want to stick with a six-man rotation, somebody must be moved to the bullpen. Unfortunately, it looks as if that somebody will be Adam Warren. Over the past month or so, one could make the argument that Warren has been our most consistent starter. Despite being a proven option in the bullpen who would help strengthen an obvious weakness in the middle relief corps, I think Warren better serves this team in the rotation. Michael Pineda and Masahiro Tanaka are not going anywhere. Nathan Eovaldi is consistently inconsistent, so moving him to the bullpen would do no good.

Out of our six starters, CC is not even a top five option! There are only $23 million reasons why the Yankees continue to start him every fifth day, and all of those reasons have George Washington, Abraham Lincoln, Alexander Hamilton, Andrew Jackson, Ulysses Grant, or Benjamin Franklin’s face on them. Aside from the $23 million Sabathia is earning this season, he will make $25 million next season, and has a $25 million vesting option for 2017, which will be triggered as long as he doesn’t get shoulder surgery. As tough as it would be to swallow all that money, the Yankees have to negotiate some type of buyout with Sabathia, or banish him the bullpen where he would serve as the wash up guy.

Sabathia has blown TEN leads this season. Many within the organization, including our incompetent manager Joe Girardi and pitching coach Larry Rothschild, will insist that CC’s 3-7 record, and 5.65 ERA are not representative of how he’s pitched this year. I emphatically agree with them on that point, however for a different reason. Girardi argues that Sabathia has been hurt by a lack of run support, and loves to point to that one game he lost against Detroit despite pitching eight innings of two-run ball. It is time for Girardi to realize that game was the aberration, and the CC Sabathia we saw against the Phillies on Tuesday is the REAL CC Sabathia. 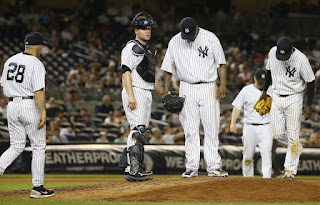 The excuses of not locating his pitches well, making too many mistakes, and having one bad inning are growing old…. FAST. The bottom line is CC Sabathia is no longer a serviceable Major League starting pitcher.

Now, let me be very clear. If I was CC Sabathia, I would not retire and leave all of that money on the table either, so as fans we should not be mad at him, but instead the Yankees management. From my observations, CC has been halfway decent while facing the batting order for the first time. For this reason they should shift him to the bullpen. Maybe he would be a decent mop up guy, or middle reliever out of bullpen. For all I know, he will probably fail at that as well, but it’s worth a shot.

Here’s my realistic plan for dealing with CC Sabathia. Since the Yankees obviously want to make some type of return on their enormous investment in the man, I recommend allowing him to keep his spot in the rotation until the all-star break. If I were Hal Steinbrenner, I would have a meeting with CC, Cashman, Girardi, and anybody else of importance in the organization. I would tell CC that these few starts are his audition for the rest of the season. If CC fails miserably, as most of us would expect him to do at this point, he is gone from the rotation, and will be sent to rot away in the bullpen. If he doesn’t want to go to the bullpen, then maybe they can negotiate some sort of buyout. 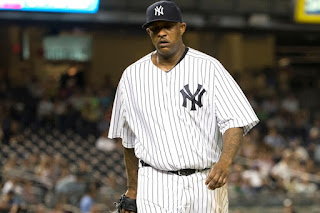 My reasoning for this plan is quite simple. Say what you want about him, but CC Sabathia is still a competitor. Maybe this added pressure would help him perform better. Up until this point, Joe Girardi and the rest of the coaching staff have done nothing but make excuses for the guy. Clearly the positive reinforcement is not effective. The only way to harness the remaining talent in CC Sabathia, if there is any talent to harness, is to flat out put pressure on the guy.

I will give this warning right now. If the Yankees finish the season a few games out of a playoff spot, one of the main reasons why will be their continued confidence in CC Sabathia. Games like this past Tuesday against the Phillies, which should have been easy victories, were instead painful losses. In the middle of a pennant race, the Yankees simply cannot afford a guaranteed loss every fifth day. Watching CC the albatross pitch every fifth day makes me miss George Steinbrenner. If “The Boss” was still alive and kicking, there is no way in hell the Yankees would continue to allow CC to lose games for the team. As a fan that works very hard for his money, I would be extremely disappointed and flat-out irritated if I bought tickets to a game started by CC Sabathia. I have no idea how the Yankees will deal with CC, but one thing is for certain: they cannot continue to watch him surrender leads, and ruin our postseason hopes.