By Chad Raines - June 20, 2015
It was a clear night with perfect baseball weather in the Bronx. It was only fitting that a bit of history was made that night, June 19. The man himself, Alex Rodriguez who’s always seemed to have a flare for the dramatic, came up to the plate in the bottom of the first. Facing the former MVP Justin Verlander, Rodriguez took him deep on the first pitch he saw marking the 3,000th hit of his career. 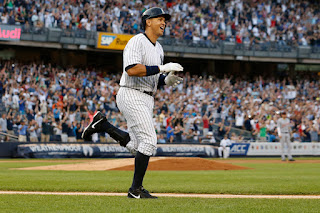 Now, yes, I am aware of the mistakes A-Rod has made – we all are. It’s been beaten down like a drum on social media and on sports shows throughout. We can’t help but face the facts: Alex Rodriguez cheated and has paid a huge price for that. There isn’t any way around that fact as unfortunate as it is.

Coming up as a rising superstar, Rodriguez was faced with a lot of pressure and it got the best of him at times. Despite his past mistakes, not only as a Yankee fan but on a personal level, I’m a firm believer in forgiveness (que the #FORG1V3 that is thrown all over social media). The things he does off the field that may go unseen by many are unmatched by many professional athletes. From being a major contributor to the Boy’s and Girl’s club of Miami to just signing as many autographs as possible, A-Rod has always made a point to give back and to be a positive influence particularly on children.

Some may say his excessive humility this year may be reconciliation for the mistakes he’s made and that’s certainly possible. I’m not saying you have to like him – and if you aren’t a Yankee fan, I wouldn’t expect you to. But whether you like him or not, you can’t ignore his talent, clean or not, so you might as well sit back and relish the opportunity that you were given in witnessing history.

Rodriguez became the 29th member of an illustrious club of legends to reach the 3,000 hit plateau. He’s the first member native to the Dominican Republic to join the club but he’s not the first member of it with confirmed suspicion about his past. And as I’ve said before, what’s happened has happened and it’s time to leave that where it belongs – in the past.

To join the 3,000 hit club on a home run is something that is incredibly unique to the Yankee organization. Of course, we all remember Derek Jeter reaching 3,000 or as Michael Kay called it, “HISTORY! WTH AN EXCLAMMATION POINT!” The only other 3,000 hit club member who joined on a home run was the former Yankee Wade Boggs who did it as a Tampa Bay Devil Ray back in 1999. It was only fitting that current Yankee himself, Alex Rodriguez entered the club in style with a home run of his own.

My main point remains: If you were able to watch Rodriguez’s home run last night, you witnessed history in many ways. Cherish the memory. We’re all fans of the game and will be fans for a long time and seeing someone reach a milestone as prestigious as this one doesn’t happen very often. 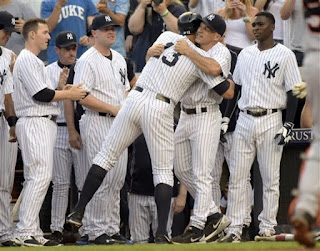 Rodriguez won’t be getting into the Hall of Fame and the A-Rod haters are going to love seeing the asterisk next to his statistics in the record books, and that’s fine by me. As a Yankee fan, I was given the opportunity to watch fantastic talent accomplish many feats are very seldom accomplished.

In case you couldn’t tell, A-Rod reaching 3,000 hits means a great deal to not only me, but my fellow Yankee fans as well. Yankee stadium probably hadn’t been that loud since the 2009 World Series win (sorry Raul Ibanez) and twitter absolutely exploded.

It was a moment that overtook Rodriguez with emotion as he pointed to his daughters as he crossed home plate. For a guy who wasn’t even sure he’d get to put on the pinstripes ever again as he sat in disappointment in 2014 in A-Rod, the sheer jubilation of the moment was unmatched by many other events that have occurred in baseball this year.

I’m aware that the majority of the readers of this blog are Yankee fans but if you aren’t or if you haven’t yet, I challenge you to forgive Alex Rodriguez. He doesn’t have to be your favorite player or your favorite Yankee because if we’re being honest, he’s not my absolute favorite Yankee.

But the 2015 season is turning into a successful comeback to a man who has self-inflicted himself with loud criticisms. As long as continues his production with humility the way he has been, there isn’t much to dislike about Rodriguez right now because at this point, he’s doing all the right things.

Watching Rodriguez’s 3,000th hit via a home run is something I can’t forget and I hope you all enjoyed it as much as I did because it was pretty cool.

Article by: Chad Raines
You can follow me on twitter @Chad_Rain
Keep up with our blog on twitter @BronxBomberBlog for the latest Yankee news, analysis, updates, live game tweets, opinions, humor, MiLB news and all things Yankees!
Chad Raines Opinion