By Chad Raines - June 05, 2015
There is something about mystery that attracts the soul. That unquenchable craving to dig deeper into truth. You are on the outside looking in and you cannot help but to peek in through an open window. Jorge Posada's story as we know it has been of classified passion. Here say that could be translated as mythical. What excited me the most about reading this book is that we could finally take our eyes off that window. The door has been opened and it's time to go in. 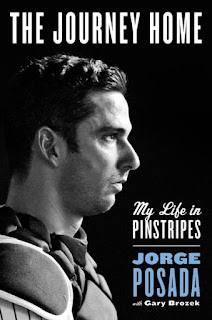 It bothers me that so many people are fixated on what he has to say about the Yankees as if the majority of the book revolves around the end of his career. We'll get to that later. What it does revolve around is the relationship that developed between he and his father. As a fellow Latino I could appreciate some of the things he mentioned in his book in regards to how he was raised. The discipline, the tough love and the stern speaking to is something I'm sure many Latinos read about in this book and smile.

Someone like Jorge who always seemed so serious and so locked in, was surprising to see just what a sense of humor he has. Describing certain scenarios in his life such as when he was pursuing Laura will be sure to have you laughing.

For as many times as baseball players make no excuses for their failure to perform, Jorge's story is a reminder that although they may appear larger than life, they are very much human beings with real problems of their own. It is remarkable the way one can balance personal issues with the rigors of baseball. The challenges faced by his family and the will to overcome them is something that will have you cheering for Jorge regardless of your opinion of him.

I can understand that an allegiance to a certain player can be subjective. We can't all like the same player, I get that. But let's quiet down all the outrage of Posada's comments towards the Yankees and let's speak a little truth. Now how many of you have spent 17 years with your current employer? Not many I would bet. I also wouldn't bet that if you were nudged out of your job after so long, that you wouldn't have an opinion let alone a point of view on it.

To think that the Yankees as an organization can do no wrong is just ignorant. They have a history of pushing people out of the door. They did it to Phil Rizutto, Bobby Mercer, Bernie Williams, even to dear old Babe Ruth. I strongly believe the only reason they didn't do it to Jeter is because the wrath of God would have fallen upon the Steinbrenners. I believe Jorge had every right to voice his displeasure for the way he was treated because personally I think it was petty. As I watched Mariano Rivera's record breaking save, it wasn't with a smile on my face. I shook my head in disbelief that even for the last out of the 9th inning of a game where you could bet your livelihood that the Yankees were going to win, you could not allow Jorge that special moment to end the game with his fellow core four member. Jorge Posada didn't retire. The Yankees retired him.

This book was well written. The best part about it is that you don't necessarily have to bleed blue to enjoy it. It is filled with entertaining, humorous and inspiring stories. If you are a fan of baseball, you will be quick to flip through the pages.