By Chad Raines - June 20, 2015
Since today is the ceremony for Willie Randolph’s entrance into Monument Park, I wanted to give you a first person perspective of what it was like to meet him. I never had the privilege to see him play but it is not hard to see how esteemed he was amongst the organization as he was named co captain during his tenure with the Yankees. Through the screen of my television he always seemed likeable. He always seemed to carry himself well, even when he was treated unfairly. All this factored in with the respect I had for him for what he accomplished in his career. He was definitely on my wish list of Yankees I would hope to meet. The following took place in the summer of 2013 at a sports show. 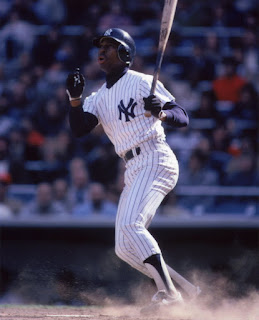 I wasn't the first one on line. I was quite far actually. But I could see him from a distance beaming. It was that same smile he had every time his Mets were able to close one out. He was genuinely happy to be meeting those who have come to see him. I have a deep appreciation for history like I have a deep appreciation of the Yankees so when you mesh the two, it makes for a highly anticipated moment on my part. "Willie it's an honor to meet you. I never had the opportunity to see you play but I've read so much about you and appreciate all you've done in the sport". (There goes that smile again) "Aww man thank you so much! It's an honor to meet you too!" Wait what? An honor to meet me? I was never a Yankee captain. Never hit a home run in my life! Was he talking to me?!

As I gave him my baseball to sign, I noticed a monstrous specimen hanging from his finger. It shined so bright that it could have probably supported the building's electrical needs if it had a solar panel. The only way I was able to identify this force without blinding myself was by quickly noticing that interlocking "NY" at the top part of his ring. An actual championship ring! I stared so long at it that I didn't notice he had finished with the autograph.

"Willie would it be ok to take a picture with you?" Not seconds after my question is asked does he say "of course!" I bet he would have let me wear that ring if I had asked. I'm just not that gutsy. Willie is one of the most genuine, nicest ball players you could ever meet. If you have the opportunity to meet him, I definitely recommend it. Because of this story that i was able to share with you is why his autograph to me is worth more than what a dealer would consider face value. It serves as a reminder that although the memory of meeting him was mine, the honor was his. 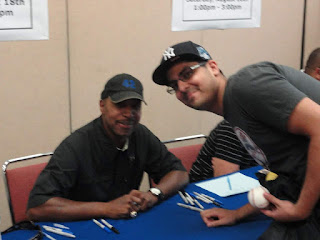