My Thoughts on Didi Gregorius

By Chad Raines - June 29, 2015
The way Brian Cashman configured the Yankees infield this offseason left me quite perplexed. While it only took below average starting pitcher Shane Greene to land the offensively challenged shortstop Didi Gregorius, I wasn’t in love with the move, but didn’t hate it either. On the other hand, I was livid when he traded one of our best offensive players in Martin Prado to the Marlins for the not so nasty Nathan Eovaldi. Even if Cashman was intent on acquiring Eovaldi, I’m pretty sure it could have been done without giving up Prado, and trading from a position of weakness. He also re-signed Chase Headley to a four-year deal, and everyone’s favorite guy to pick on Stephen Drew to a one-year deal. With this set-up, the Yankees have been getting virtually no offensive production from the two middle infield spots. If the Yankees plan on winning the AL East and contending for a championship this season, either Drew or Didi must go. Unfortunately, Gregorius has not given me any reason to believe he can improve and become our shortstop of the future. 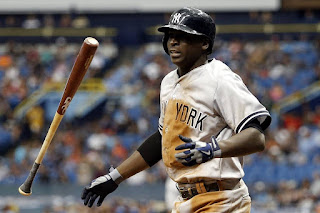 I could immediately tell on opening day that I was not going to like Didi Gregorius all that much. With the Yankees down a couple runs in the 7th inning, and runners on first and second for Mark Teixeira, Gregorius broke one of baseball’s cardinal rules, and was thrown out attempting to steal third base, thus making the third out at third base. This bone-headed mistake on the part of Gregorius killed the Yankees only rally attempt of the entire game. After this ill-advised decision of his, many members of the crowd, including myself began a D-E-R-E-K J-E-T-E-R chant to show our dissatisfaction with Cashman’s latest mistake. 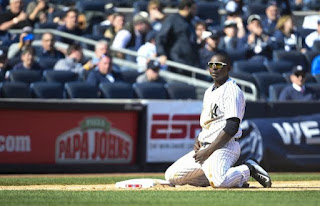 First and foremost, succeeding Derek Jeter is a very tall order, and the fan base should cut Gregorius some slack. Take note of my word use in that sentence. I used the word succeed, instead of replace because nobody can replace Derek Jeter. If Gregorius was at least playing as well as an average MLB shortstop I would not be writing this article, but unfortunately he has been completely and utterly atrocious. While he has shown some signs of possibly becoming an elite defender, for the most part I have been underwhelmed by his defensive performance considering how much Cashman talked him up. I will admit that he has gotten to more balls than Jeter did in his later years, but that’s not really saying much. Once again, if Gregorius were an above average defender, and a .250 hitter, then I would have no problem. Thus far, Didi has nine errors. He is second on the team, behind only the error machine Chase Headley in that category. Despite some of his defensive woes, which some may attribute to his immaturity, I’ll cut him some slack on the defensive end.

I don’t think it’s a stretch for me to say that Didi Gregorius is one of the worst hitters I’ve ever watched. First of all, whenever he swings the bat his undercut swing resembles a golfer attempting to hit the ball out of the sand pit area (my golf terminology is probably incorrect considering I know nothing about golf). I can’t even count the amount of times Gregorius has come up this season with a runner in scoring position, and failed to have a productive at bat. Instead of either moving the runner over, or getting him home via a soft ground ball, or sacrifice fly, Gregorius seems inclined to swing for the fences. I haven’t checked the statistics, but I wouldn’t be surprised if he led the team in pop ups.

I have given hitting coach Jeff Pentland nothing but high remarks for his part in contributing to the turnaround of the Yankees offense from the mediocrity of the past couple of seasons. While guys like Beltran, McCann, Teixeira, and Gardner have had great bounce back years, Gregorius has made no progress whatsoever at the plate. Does he look better now than he did in April? Yes, but that’s not saying much considering how horrendous he was earlier in the season.

I think as fans we have to come to realization that Gregorius is offensively challenged, and will never become a major league hitter. He is only 25, but considering no progress has been made from his rookie season I have no reason to be optimistic. Just think about this for a second. At age 40, Derek Jeter had a better offensive season than Gregorius has had this year. In fact, I’d take a 50-year old Derek Jeter with one leg at the plate over Didi Gregorius. There’s simply no way to miraculously transform a 2001 Toyota Camry into a 2015 Mustang. Gregorius is nothing more than a .230 hitter who will hit the occasional meaningless home run.

Unless Gregorius or Drew turn their seasons around in the weeks leading up to the trade deadline, Joe Girardi and Brian Cashman have some decisions to make. There are two ways I would handle our middle infield situation, and both of them include reacquiring Martin Prado, who shouldn’t have been traded in the first place!! After putting Prado at second, the Yankees can either designate Stephen Drew for assignment, and stick with Didi at shortstop, or shift Drew to short (which is his normal position) and move Didi to a utility role. When it’s all said and done, I see Didi Gregorius as nothing more than Brendan Ryan, except for the fact that he’s not perennially on the disabled list.

I know many fans continue to believe and want him to succeed, due in large part to his age, but we have to accept the reality of the situation, and that reality is simple: Didi Gregorious is not a good baseball player.

I’d also like to raise the same point as I did in my recent article on CC Sabathia. How long will the Yankees continue to play players who just are not good? Gregorius, like Sabathia, falls into this category. Being the only starting position player under age thirty on this team, I understand why many Yankees fans are excited about Gregorius, however his apparent unwillingness to change his swing or approach at the plate, in conjunction with what seems like a lack of offensive talent, makes me believe Gregorius’s time in the Bronx will be short-lived. I’m not saying we should completely give up on Didi yet, however we should also take a step back and realize he is not the shortstop of the future.
Side note: I was sick to my stomach earlier upon receiving news that Esmil Rogers was recalled.