By Chad Raines - June 06, 2015
As I currently sit here and write this evening the Yankees enjoyed what turned into a nail-biting 8-7 win over the Angels thanks to two home runs by Stephen Drew and one by Mark Teixeira respectively. Certainly the start to this game is the type of game the Yankees and their fans were hoping to have coming off a sweep of Seattle earlier this week.  It’s still early June and teams aren’t quite ready to pack it in and sell but that doesn’t mean the Yanks shouldn’t be doing their diligence on the market. Here are a few possible names that could be donning pinstripes come August 1st. 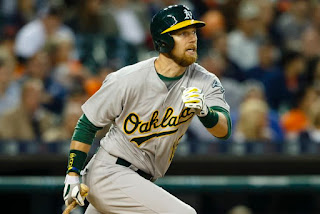 Cespedes is in his first year as a member of the Detroit Tigers. He was acquired in an offseason deal that sent pitcher Rick Porcello to the Boston Red Sox. Since Cespedes made his big league debut with Athletics in 2012 he has been known for his mammoth home runs and great throwing arm. His defensive ability minus his arm is a little suspect however. He is far and away an upgrade from Carlos Beltran, Chris Young, Garrett Jones or anyone else the Yankees want to stick out there in right. It is for that reason that the fit is easy to envision. Cespedes is a free agent following the 2015 season but the Yankees certainly have the money to re-sign a player of his caliber.  Now the real question with Cespedes is would Detroit be willing to deal him? They are a perennial playoff contender but have been struggling terribly as of late. This is something to watch for as the trade deadline approaches.

Ben Zobrist. (Utility, Oakland Athletics)
The beauty of Ben Zobrist is that he can play at multiple positions on the diamond. Not only that but he’s a ball player, he is the type of guy you want on your team. He’s a solid fielder with some pop at the plate that always seems to come through in the clutch. Zobrist would help the Yankees at a multitude of positions and bring another great character guy to the clubhouse. The Athletics are struggling mightily this year (though they are coming off four straight wins) and GM Billy Beane is never shy about making a move that could improve his club in the long run. Zobrist is a guy I believe can be a real difference maker for New York as they continue their push towards the playoffs and a 28th World Series title.

Honorable Mentions
At this time, a couple wildcards include Dustin Ackley of Seattle, Scott Kazmir of Oakland, Casey Fien of Minnesota, and Ryan Howard of Philadelphia. And why not, let’s throw out the blockbuster of Troy Tulowitzki of Colorado.

Obviously this is pretty preliminary and a plethora other players could become available. It is still early June but once July rolls around the contenders are going to separate themselves from the pretenders. Without a question the Yankees can be contenders and after two consecutive years of missed playoff births, ownership is in win at all costs mode.