By Chad Raines - June 03, 2015
Upon Masahiro Tanaka’s highly anticipated return to the Yankees, right-hander David Carpenter takes the fall as he has been designated for assignment. With Carpenter sent packing, this could be the first of a plethora of moves made in the next couple weeks. 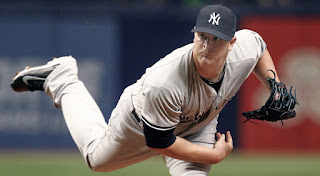 As Yankees fans, we felt like we had got the better end of the deal with a solid pitcher in Shreve and a guy who was becoming a reliable reliever in Carpenter. Essentially, most fans were excited about having the hard throwing Carpenter to pitch the 7th inning.

However, Carpenter was absolutely dreadful in his two months in Pinstripes. Carpenter seemed to be throwing beach balls to opposing hitters as they hit .286 against him and .353 over the past 28 days. Coming off a solid 2014 season where he posted a 3.54 ERA striking out nearly 10 batters per 9 innings, Carpenter pitched to an ERA of 4.82 and only struck out 5.3 per 9 innings. His drop-off is quite inexplicable to say the least.

The Yankees now have an abundance of left-handed pitchers in the bullpen including Andrew Miller, Chasen Shreve, Justin Wilson, Jacob Lindgren and Chris Capuano compared to right-handers Dellin Betances and Esmil Rogers. With Chris Martin on a brief stint with AAA-Scranton, Capuano will likely be the next victim of the DFA train that may run rampant across the team over the next month or so.

Interestingly enough, Carpenter being designated for assignment frees up a spot on the 40-man roster as there are now 39 spots occupied. Now, I’m just speculating, but it wouldn’t surprise me if Rob Refsnyder is brought onto the 40-man roster in what would be a mandatory prerequisite to him being called up to the big league roster – possibly for one Stephen Drew.

Now that I’ve gotten your hopes up, I’ll certainly keep you updated on who fills the void on our twitter account. It’s unfortunate Carpenter couldn’t get it going, but this was definitely the right move for now.