The Law, Aaron Judge on the Rise

By Chad Raines - June 22, 2015
I bet you are all familiar with word association. I'll say a name and you say the first thing that comes to mind. For the common fan, when mentioning the name Aaron, you think of game 7 of the 2003 ALCS when Aaron Boone hit that walk off homerun off Tim Wakefield. As unlikely a hero as he was on that night, his name is sure to live on for centuries. For those passionate fans, the name Aaron is taking up a whole new meaning. 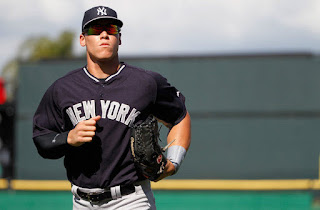 After the 2014 season, baseball America ranked Aaron Judge as the 53rd best prospect out of 100. Baseball prospectus had him at rank number 49. Within the Yankee organization, in 2013 he ranked 6th and 2014 ranked 2nd respectively. He may have been a name you have heard in conversations. I wouldn't be surprised as his tools are something of a conversation starter. As unfair as it is to compare his power to that of Giancarlo Stanton, you need only look up video of his home runs to see how justified that argument is. His at bats are quickly approaching that of a "hold your urine" status.

As Yankees fans clamor for the next crop of home grown talent, Aaron Judge continues to impress and improve in every level he has been in. In 63 games with the Trenton Thunder this year, Aaron Judge hit .284 with 12 HRs, 44 RBIs and 16 doubles. Much like a referee stops a fight, the Yankees have said they've seen enough at the AA level and revealed Sunday that he is being promoted to AAA-Scranton. This will be a player for which you could invest your hope. Though the Yankees are running with a crowded outfield in the Majors and minor leagues, I can't help but think it's only a matter of time before we see his first major league at bat. 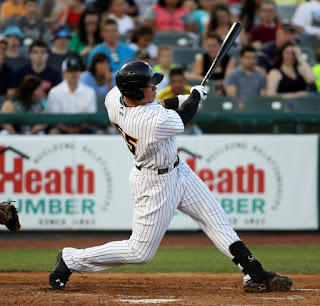 With the news that broke yesterday about his promotion, the reality of it is inching closer. This isn't Santa Claus folks, Aaron Judge really is coming to town. He may not know who's been bad or good but neither will bode well for the pitching he will face. This will undoubtedly be the most anticipated debut since the ice cream loving Jesus Montero. The only difference is that Judge is set in his path. He's a 6’7”, 275 pound outfielder who is appropriately touted as the future. Lucky for Yankee fans, the future is almost upon us.