When Umpires Rule the World

By Chad Raines - June 07, 2015
I want to take you back for a moment. Let's pretend its 2014 all over again but I want you to wipe the slate clean. Clear your memory of what occurred last year. Now let's go to Derek Jeter's retirement announcement. After the shock and rush of emotions settle into you I want you to make a prediction for me. What do you predict will happen in Derek Jeter's last season of baseball? Throughout his career he has had a flare for the dramatic. A homerun for his 3000th hit? You have got to be kidding me. It's as if it follows him everywhere. So what did you see happening during his farewell?


I very much felt convinced that some way, somehow, when we least expected it, Derek Jeter was going to get tossed from a game. As outrageous as that sounds, you couldn't convince me otherwise. We all know what Derek Jeter is about. All his close personal friends and teammates have all come out and said how classy and professional he is. That didn't matter to me because lately I have seen a trend in umpires that has surpassed all logic and understanding.

I used to think that the strongest force in this universe was the Major League Baseball player's union. The things they have been able to accomplish with protecting players, and epitomizing the very sense of the word union was powerful. I couldn't find a comparison. As time has passed us by though, I have learned that the MLBPA is one chain link below the top of this food chain. All hail the mighty umpires of major league baseball.

What we saw Sunday with CC Sabathia getting ejected was what I have come to expect as status quo. Throughout the past few years I've seen the most ridiculous actions come from umpires, leaving fans outraged. When these games are over and we are all lost in our confusion, the umpires retreat to their lair, never to be seen or heard from again. It's no surprise to me that as reporters were looking for home plate umpire Dan Bellino to get some answers, crew chief Tom Hallion stepped in and proclaimed that he was speaking for him. And oh by the way, where's that Calzone he ordered 3 minutes ago. 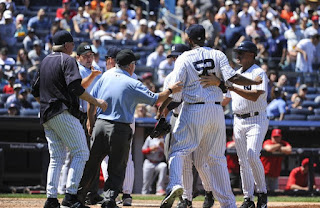 I strongly believe that baseball is the most difficult sport there is. The success to failure rate is overwhelmingly high on the failure side. This is why it bothers me that a game's outcome can be affected by the temperaments of an umpire. Their sensitivity level is at an all time high and it seems like there is no motivation to look into this issue. I am not trying to down play the importance of an umpire. I know that their job is equally as difficult. But just like in any aspect of life, in order to better yourself you need to learn how to accept criticism which they obviously cannot do.

I fear the future. I continuously get flashing images of a masked man entering a subway train in which I'm commuting in. His chest is bulging from the padding under his blue shirt. Oddly enough he has both pockets full of baseballs. As he surveys the scene he singles me out as I am comfortable in my seat with my eyes on my tablet. He points at me and yells, demanding me to leave the train. "What did I do?" I ask. As I look around for help, I realize that this is the world we have allowed to develop. When Umpires rule the world.......