Who Are the Yankee Killers?

By Chad Raines - June 03, 2015
We all know they’re out there, players who for whatever reason love hitting against the New York Yankees. It seems that nearly every year, one particular player absolutely crushes the Yankees. In 2015, the ones that come to mind immediate include Rangers 1B, Price Fielder, Orioles outfielder, Jimmy Paredes, and Blue Jays 1B Edwin Encarnacion. From current superstars to relatively unknown players, there are some players you just hate seeing at the plate against Yankees pitchers. For the purpose of this article, I focused on players currently in the league and have included their career numbers against the Yankees following my brief paragraph about them. 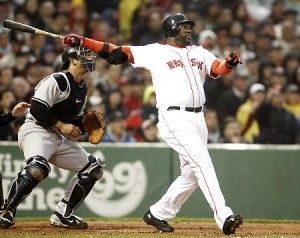 Prince Fielder (Rangers)-Prince is a guy that especially after looking at how good he has been against the Yankees, I was almost forced to pick him over the first baseman I decided to go with. As we know, Fielder has enjoyed success about many teams, but his OPS and overall numbers against the Yankees are ridiculous. Fielder killed the Yankees in his brief 3 game series thus far in 2015 but he also did a lot of damage against the Yankees as a Detroit Tiger.
G 22, H 30, 2B 3, 3B 0, HR 8, RBI 25, AVG .353, OBP .417, SLG .671, OPS 1.087

First Base: Mike Napoli (Red Sox)-Mike Napoli just might be the second easiest Red Sox player to hate aside from David Ortiz. Unfortunately, the man rakes against New York Yankee pitching. Quite possibly my least favorite moment of last season was the top of the 9th go-ahead home run he hit off of Masahiro Tanaka to give the Red Sox the 2-1 win (forgive me for the bad memories). Below are his stellar numbers against the Yankees.
G 68, H 69, 2B 15, 3B 0, HR 17, RBI 50, AVG .308, OBP .426, SLG .603, OPS 1.029

Shortstop: Alexi Ramírez-Shortstop was tough call for me due due to their being one clear-cut candiadate. It could’ve been Ciriaco, but the sample size was too small. The next closest player was Jose Reyes but an All-Star as he is, Reyes’ numbers weren’t impressive enough for him to make the cut. Ramírez has been a solid player and in a select few games against the Yankees his power numbers are up and his batting average is slightly better than his career average.
G 42, H 44, 2B 6, 3B 1, HR 7, RBI 20, AVG .282, OBP .313, SLG .468, OPS .781

Center Field: Adam Jones (Orioles)-When I looked at Adam Jones’ career numbers, I was pretty surprised at how unimpressive they were. Then I began looking back at all the times he’s hit a clutch home run or come up huge defensively for the Orioles against the Yankees and that made my decision easier. Although Jones’ numbers aren’t overly impressive especially compared to his career numbers, he does a myriad number of positive things for his team and is a Yankee killer due to that.
G 128, H 137, 2B 25, 3B 3, HR 19, RBI 69, AVG .275, OBP .311, SLG .451, OPS .762 Designated Hitter: David Ortiz (Red Sox)-This one was without a doubt the easiest of all, partially due to the lack of competition at DH but also due to the fact that David Ortiz is seen in every Yankee fan’s nightmares. Although I can’t stand him, Ortiz is one of the more clutch hitters of his time and that couldn’t be truer against the Yankees. I don’t need to say much more about Ortiz, his eye depressing numbers against the Yankees are below.
G 214, H 256, 2B 67, 3B 1, HR 45, RBI 154, AVG .307, OBP .397, SLG .563, OPS .960

Well, that wraps up the “Yankee Killers” list. I feel like I was fair to all divisions although most of the anti-Yankees play in the AL East simply because they receive more exposure to Yankee pitching. Is there anyone you feel I left off? Leave the name of the player and why in the comments!