Why the Bronx Faithful Has Accepted Alex Rodriguez

By Chad Raines - June 23, 2015
As soon as he was acquired from the Texas Rangers, Yankees fans seemed apprehensive towards accepting Alex Rodriguez as one of their own. Despite winning two MVPs while putting up stellar numbers in his first five seasons with the club, A-Rod’s glaring postseason failures proved to be a vehicle many used in their unwillingness to embrace him. I would argue that A-Rod was scapegoated for the team’s general failures in the postseason during that period. Rodriguez was acquired after the Yankees disappointingly lost the 2003 World Series to an underdog Florida Marlins club. Many chose to blame the embarrassing 2004 ALCS collapse against the Boston Red Sox, along with the 2005, 2006, and 2007 early playoff exits in the ALDS, to the Los Angeles Angels of Anaheim, Detroit Tigers, and Cleveland Indians, respectively, on the team’s big money super star. I vividly remember many fans saying something along the lines of, “Alex Rodriguez will never be a true Yankee.” This led me to ask myself, what is a true Yankee, anyway? The definition of a true Yankee is very ambiguous to say the least, and I guess it just depends on the perceptions of the fans. Rodriguez has always had a hard time staying out of the media spotlight, and hasn’t exactly handled himself in the most professional manner. One would think spending about 10 years playing with the media role model and classy Derek Jeter would have had some type of effect on Alex’s behavior, but maybe we are finally seeing that Jeter influence in 2015. 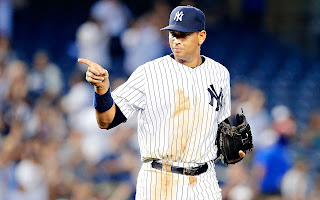 During the 2009 playoff run, Rodriguez put the team on his back and led the Yankees to its 27th World Series Championship, which was also the first of his career. The 2009 season was precipitated by a startling revelation about the Yankee superstar. His name had been leaked from the 2003 Mitchell Report of players who tested positive for using PEDs. The man who had been presumed to be the future “Clean Home Run King,” who was supposed to take the sacred title back from *accused* steroid-user Barry Bonds, turned out to be a fraud. To his credit, Rodriguez accepted full responsibility, and issued an apology during a spring training press conference. Putting these issues behind him, the embattled Rodriguez worked his way back from injury, and in his first at-bat of the season in Baltimore, put the Yankees ahead with a three-run home run. His dramatic return from the disabled list only foreshadowed what was to come in the 2009 postseason. From his game-tying home run in the bottom of the 9th in ALDS Game 2 against Twins, to his clutch hitting against the Phillies in the World Series, Rodriguez hit .365 with a .500 OBP, 6 HRs and, 18 RBI’s in 15 games. Sadly, in 2010, 2011, and 2012, Rodriguez’s postseason struggles returned. In 2012, A-Rod was in such a funk, that in an ALDS game against the Orioles, down by one-run in the 9th inning, Raul Ibanez was used as a pinch hitter (though the move did pay off as Ibanez homered twice, once to tie the game and once to win it).

After suffering yet another injury, Rodriguez was out for the most the 2013 season. Subsequently, the Biogenesis story broke. A-Rod was accused of using PEDs yet again, and began his plummet to rock bottom. Having nothing to lose after being handed an unprecedented 217 game suspension by overzealous outgoing commissioner Bud Selig, Rodriguez filed an appeal. First and foremost, Alex’s scorched-earth approach towards MLB and the New York Yankees was WRONG. The frivolous lawsuits he filed against the players union, the Yankees, and team physician Christopher Ahmad were WRONG. With that being said, MLB was also WRONG. Having ignored the steroid issue for much of the 2000s, it is clear that Selig targeted Rodriguez in order to preserve his legacy as the commissioner who cleaned up the sport. I’m not even going to go into detail about the way MLB conducted its investigation. I’ll just say this, had A-Rod’s appeal been filed in a court of law, almost all of MLB’s evidence would have been thrown out. Unfortunately for Alex, the Collective Bargaining Agreement specifically laid out arbitration as the medium for settling suspension disputes. Following Arbitrator Frederic Horowitz’s decision to decrease the suspension to 162 games, A-Rod backed off of his litigious strategy, and decided to quietly serve his sentence.

America has historically been a forgiving nation. We are generally of the belief, that once one serves their time for a crime committed, they should be welcomed back into society. Alex Rodriguez may be controversial, but for Yankees fans, he is OUR controversy. New Yorkers have been always been the type of people who take care of their own. With most of the baseball world against him, A-Rod has been able to secure the support of the Bronx faithful. I witnessed this first hand on opening day. Though there was some boos in the stadium, for the most part he was cheered. I remember one particular exchange with a fan sitting next to me. He said, “I don’t care what A-Rod does. There is no way I will root for that cheater again.” So I asked him very calmly, “If A-Rod doing well means the Yankees do well, you STILL wont root for him?” The man sidestepped the question, but it appears as if this very logical argument really resonated with him, as it should all fans.

Let’s face it. Alex Rodriguez is the most exciting player on this Yankees team right now. I was also present at the game he hit home run number 661. This time, however, there were no boos. The stadium erupted in cheers, and gave him the first curtain call of the season. When I go again on July 3rd, I fully expect the fans to support Rodriguez even more so. At the end of the day, A-Rod is an integral part of this offense. Being the team’s longest tenured player, Rodriguez has been around for some tough times, but also for a championship run. He knows what it takes to win, and is also a leader in the clubhouse.

My main point is quite simple. When Alex Rodriguez succeeds, the Yankees succeed. Going back to my earlier point, I believe that A-Rod is now officially a true Yankee. So I ask the following question: as humble as A-Rod has been, how can Yankees fans root against this guy?