By Chad Raines - June 22, 2015
The Yankees came into the weekend series with the Detroit Tigers looking to catch fire after losing 4 of 7 but riding a 2-game winning streak at the same time. Although the Yankees efforts for a sweep came up short, the series was an overall victory for the Bronx Bombers.

GAME ONE (6/19)
NYY 7 VS. DET 2
Game one was the most highly anticipated game of the series not due to the pitching matchup of Justin Verlander versus Adam Warren but because of the potential milestone the fans were going to see: A-Rod’s 3,000th hit. To the fans pleasure, Alex Rodriguez came through delivering a solo shot to right field in the first inning to record 3,000 career hits. He became the third man to join the 3,000 hit club by way of a home run joining Wade Boggs and Derek Jeter and became the 29th member overall. 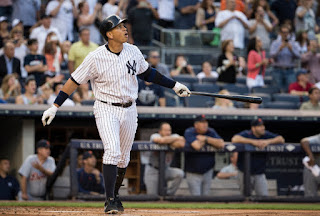 Didi Gregorius continued hitting the ball well with a solo home run to tie the game at 2 apiece before Brett Gardner continued his hot streak with a 2-run home run. Brett Gardner came in to score to push the score to 5-2 before RBI singles from Mark Teixeira and Gardner made the score 7-2.
Adam Warren had what was probably hit strongest start of the year going 8 strong innings allowing 7 hits and 2 runs both earned striking out 7 and walking nobody. Brandon Pinder recorded the final three outs as he pitched the ninth inning.

GAME TWO (6/20)
NYY 14 VS. DET 3
Game two featured another offensive outburst for the Yankees in a pitching matchup of Nathan Eovaldi against Alfredo Simon. The Yankees got to Simon early thanks to a leadoff triple for Brett Gardner that led to an RBI groundout by Alex Rodriguez. Didi Gregorius hit a home run for his second day in a row to push the score to 2-0 and A-Rod plated the Yankees third run on a sacrifice fly. The Yankees pushed five runs across in the third inning via a solo homer by Carlos Beltran, an RBI single by Chase Headley and a 3-run home run from Alex Rodriguez for hit number 3,001. Carlos Beltran hit his second home run of the game to make it a 9-0 game and Chris Young picked up an RBI single on a check swing which was ironically the Yankees second check swing single of the inning (Didi Gregorius).

Brett Gardner picked up three legs of the cycle – single, double and triple – all by the fourth inning of the game but was unable to complete the cycle by hitting a home run. Chris Young took advantage of facing a position player on the mound in Josh Wilson from Detroit as Young took him deep in the 8th inning. Nathan Eovaldi tossed 6 innings allowing just 3 hits and 2 runs, both earned. He struck out 4 and walked one. Bryan Mitchell pitched 3 innings allowing 4 hits, 1 run while striking out 2 batters. Mitchell was credited with the save. 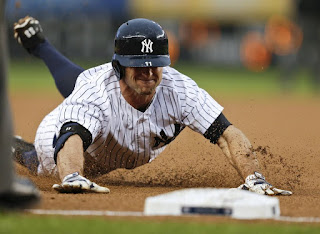 GAME THREE (6/21)
NYY 4 VS. DET 12
One day removed from a blowout of the Tigers, the Tigers bats came out with a vengeance against Masahiro Tanaka. Tanaka struggled early allowing 6 runs in the first two innings although an error by Didi Gregorius led to a 2-run shot by J.D. Martinez in the first inning. Martinez would homer two more times on the day totaling 3 home runs and 6 RBIs on the day. Tanaka lasted just 5 innings allowing 10 hits, 7 runs (5 earned) while striking out 6 and walking 2.

The Yankee offense was supplied in large part thanks to Stephen Drew’s third two home run game of the season. Drew smashed home runs number 10 and 11 – both solo shots in the game. Brian McCann hit his 10th home run of the season and Brendan Ryan continued hitting the ball well early in his season with an RBI single.

The Yankees turned to the just called up and hard-throwing right hander Danny Burawa who had a less than successful Major League debut. Burawa was chased after recording just two outs allowing 3 hits and 4 runs all earned on a Yoenis Cespedes single and a J.D. Martinez home run. Jose De Paula then came in pitching 3.1 innings allowing 2 hits and 1 run on a solo home run served up to Andrew Romine. De Paula struck out 2 but was wild with 4 walks.

MY TAKES
I’ve already covered this in a previous article, but A-Rod’s 3,000th hit is a memory I have etched in my mind forever. Whether you love him or hate him, you have to appreciate the moment and the milestone it takes a lot of skill to reach 3,000 career hits. Adam Warren is coming on strong to make a case to stay in the rotation although I would assume he is knocked to the bullpen with the return of Ivan Nova. Nathan Eovaldi could also be bumped into the bullpen but that is more unlikely. The Yankee offensive outburst in game two was one of the most fun games to watch all season while game three was not very enjoyable to watch. Overall, this was a very successful series for the Yankees against an always tough Detroit Tigers team.

LOOKING FORWARD
The Yankees will face one of the worst teams in the MLB in the Phillies. In a series that many Yankee fans expect the team to take advantage of, a sweep would be very nice but winning two out of three is expected. The Yankees will have Michael Pineda (8-3 3.54 ERA) pitching against Kevin Correia (0-1 1.69 ERA) of the Phillies in game one. Game two will feature CC Sabathia (3-7 5.31 ERA) against Sean O’Sulllivan (1-5 4.79 ERA). We will see Cole Hamels (5-5 2.96 ERA) a pitcher to be determined for the Yankees. It would not surprise me if Ivan Nova makes his highly anticipated season debut in the series finale against the Philadelphia Phillies.

Article by: Chad Raines
You can follow me on twitter @Chad_Rain
Keep up with our blog on twitter @BronxBomberBlog for the latest Yankee news, analysis, updates, live game tweets, opinions, humor, MiLB news and all things Yankees!
Chad Raines Recap