By Chad Raines - June 03, 2015
After losing 3 out of 4 in Oakland, the Yankees finish off the road trip strong by sweeping the Mariners in 3 games. 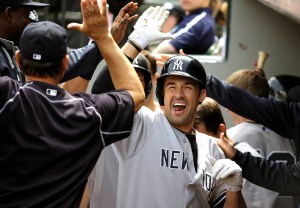 The Yankees started out this three game set with the Mariners facing the best starting pitcher in the American League. However, the final line score did not support that theory. Coming into the game “King” Felix Hernandez was 8-1 with a sub-2 ERA. After finishing a series against the A’s where the Yanks failed to score more than 5 runs in any game, the offense explodes for 7 runs off the American League’s best pitcher. Hernandez held the Yanks hitless through the first 3 innings, but it was in the 4th inning where the offense started to wake up. Brett Gardner broke up the early no-hit bid with a single and Chase Headley immediately followed with the same. A wild pitch and run scoring double play later, the Yankees found themselves up 2-0 on Hernandez. The 5th inning was when the wheels really fell off for Hernandez. He started off the inning by giving up a walk to Stephen Drew, a single to Ramon Flores, and another walk to Brett Gardner. Quickly the Yankees have the bases loaded and nobody out. A Chase Headley sacrifice fly gave the Yankees a 3-0 lead. Two batters later Mark Teixeira delivered the big blow of the game. He launched a grand slam to right center giving the Yankees a 7-0 lead on Felix Hernandez. For Tex it was homerun number 15 and he also boosted his RBI total to 39 (Which at the time made him the league leader). It was a very good sign for the Yankees to explode for 7 runs off an elite-starting pitcher. For all the questions surrounding the team, they pretty much silenced any questions about how they can fare against a stud pitcher. 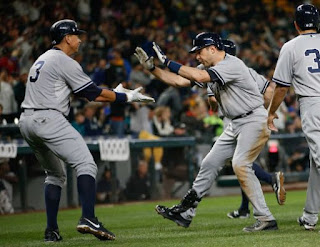 Although the Yankee offense stole the show in game one, the Yankees ace pitcher Michael Pineda pitched fantastic, earning his 7th win on the year while lowering is ERA to 3.33. Big Mike’s final line was 6.0 IP 7H 2R 2BB 9SO. So once again Pineda racked up a bunch of strikeouts en route to victory. Justin Wilson, Dellin Betances, and Chasen Shreve pitched out of the bullpen for the Yankees allowing 1 hit in 3 innings with 4 strikeouts (3 coming from Betances). Overall it was a very exciting night for the Yankees and their fans. The ace pitched like and ace, the bullpen pitched lights out, and the offense pummeled the best starting pitcher in the league.

The Yankees came into game 2 on a high note after taking the series opener 7-2 and handing Felix Hernandez only his 2nd loss on the year. In game two the Yankees faced a much less experienced starter in Mike Montgomery. In fact Montgomery has had no experience, he was making his major league debut. His counterpart in this one was CC Sabathia who has struggled on the year but has had glimpses of hope. It was smooth sailing for both starters through the first 2 innings. It was the 3rd inning where things got interesting. After a questionable call on a check swing by Brett Gardner resulting in a walk, the same thing happened on an Alex Rodriguez check swing. Both calls were questionable but Mariners manager Lloyd McClendon had a very strong opinion. After A-Rods walk McClendon came charging out of the M’s dugout and gave an earful to all 4 umpires on the field. He threw his hat in anger and put on a show for the fans. He was ejected from the game along with starting catcher Mike Zunino. After the little delay, Mark Teixeira ripped a first pitch double into the left field corner. Gardner came around to score to give the Yankees a 1-0 lead early on. The Mariners answered right back in the bottom half of the 3rd with a run on an RBI single by Nelson Cruz.

It seems like every time CC is on the mound, the 5th inning is where he runs into trouble and it was not different this time out. Austin Jackson and Willie Bloomquist both singled to led off the inning. So CC needed to get through Robinson Cano, Nelson Cruz, and Kyle Seager. He got both Cano and Cruz to fly out to center for the first two outs. Seager however, tried catching the Yankees and CC off guard by lying down a bunt and forcing CC to make a play (Which he hasn’t been able to do very well this year). But CC hopped off the mound, fielded, and fired to first to end the Mariner threat in the 5th. Sabathia was fired up after getting out of the jam and was seen exchanging words with Seager as the inning concluded.

Sabathia’s night came to an end with 2 out in the 6th. With runners on the corners and 2 outs Girardi decided to make the call to the bullpen. Girardi called on David Carpenter and once again he fails to get the job done. Carpenter gives up a 2 out, 2 strike go-ahead double to Austin Jackson. Carpenter then got Bloomquist to fly out to right and end the inning. After 6 the Mariners led 2-1.

As the game entered the 9th the Yankees were still down 2-1. They had runners on the corners with 2 outs and 2 strikes with everyone’s favorite player at the plate, Stephen Drew. Drew has had a rough start to the season to say the least. However, he has had a few clutch hits and he did it again. He ripped a game tying double to right field tying the game at 2. Justin Wilson made an potential game changing play when he dove for a bunt of the bat of Rickie Weeks to make the catch and fire to first to turn the double play. The game carried on for 2 more innings before we saw another run. In the 11th inning Garret Jones stepped up to the plate with 2 outs and 2 on. He promptly launched a go-ahead 3 run home run over the right center field wall giving the Yankees a 5-2 lead. For Jones it was only his second home run but it was a huge one. Andrew Miller then came into the game in the bottom half of the inning and did run into some trouble. He gave up an RBI single to Robinson Cano but he later settled down and struck out Nelson Cruz to end the game.

It was a very pleasing win for the Yankees and their fans as they come back on the road to win a game late. After 2 games in the series the Yankees give the ball to Masahiro Tanaka to go for the sweep in game 3 on Wednesday.

Entering game 3 of the series, the Yankees and their fans were very excited for the return of star pitcher Masahiro Tanaka. Tanaka has not pitched in over a month with a forearm injury. In his first game back he was absolutely lights out. He pitched like the ace fans were expecting. Tanaka gave up a leadoff triple to Brad Miller in the bottom of the 3rd. Miller later scored on a double from Dustin Ackely. That 3rd inning run was the only run surrendered by Tanaka on the afternoon. His final line was 7IP 3H 1ER 0BB 8K. Tanaka improved his record to 3-1 and lowered his ERA to 2.76. Chris Capuano relived Tanaka but did not perform great. He managed to get one out in the 8th however he left the game with the Mariner threatening and the bases loaded. Miller took the ball from Capuano and did what he does best. He slammed the door and picked up a 1 2/3 inning save. He got out of the bases loaded jam in the 8th and then pitched a clean 9th inning.

Offensively the American League leader in RBI, Mark Teixeira, powered the Yankees. He hit his 16th homerun of the season to give the Yankees an early 1-0 lead in the 2nd. Later on in the 4th, after the M’s tied the game at 1, Garret Jones continued his clutch hitting and launched a 2 run homerun to put the Yankees back on top 3-1. It was a lead the Yankees would protect as they finish off the sweep of the Mariners.

MY TAKES:
Its always great when you can sweep a series, but it is even better when it is on the road against Robinson Cano, Felix Hernandez, and home run champ Nelson Cruz. The Yankee pitching was stellar as the Mariners could only manage 6 runs in the entire series. Pineda, CC, and Tanaka all pitched fantastic and it gives us fans hope as to what the rotation has the potential to be. Pineda stood out in particular in my opinion. He stood toe to toe with arguable the best pitcher in the game and fat out beat him. He set the tone in the series and the Yankees rode the momentum. Another part of the Yankees that stood out to me in the series was the timely hitting from players that have been struggling. Jones had 2 homeruns, Didi had 4 hits in the series, and Stephen Drew had that big game tying RBI double in the 9th inning in game 2.

LOOKING FORWARD:
The Yankees finish the west coast trip 4-3. They will have an off day Thursday before starting a 3 game weekend series with the Angles. The Angels, entering Wednesday have won 5 of their last 6 and are in 2nd place in the American League west. The Yankees will most likely have Nathan Eovaldi pitching Friday, Adam Warren Saturday, and Michael Pineda in the finale Sunday. The Yankees have won 7 of their last 10 and look to continue their hot play at home.