By Chad Raines - July 17, 2015
Since it’s officially the second half of the season I figured I would come up with some first-half awards in the time being. 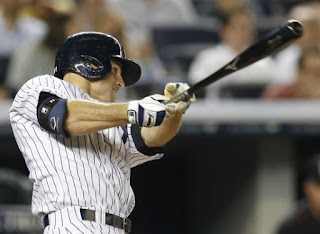 Most Valuable Player: Brett Gardner (81 Games .300 BA 10 HR 42 RBI 15 SB 3.5 WAR)
To me this was a toss-up between Gardner and Teixeira, but I decided to go with Gardner based on a higher WAR and batting average. Gardner has so far had an amazing year in pinstripes which has earned him a nod to the All Star game. I personally think Jacoby Ellsbury would’ve ended up winning this award if he had not gotten injured, but alas we’ll never know. Let’s all hope that Gardner can keep this hot streak going through the rest of the season.
Honorable Mention: Mark Teixeira (81 Games .240 BA 22 HR 62 RBI 1 SB 2.7 WAR)

Most Valuable Pitcher: Michael Pineda (17 GS 9-5 W-L 3.64 ERA 111 K 106.1 IP)
Pineda has had his ups and downs this season, but overall Pineda has been the best Yankees pitcher in the rotation. Not only has Pineda been able to keep opposing hitters in check for the most part, he also has been able to stay healthy which is key for the second half of the season.
Honorable Mention: Dellin Betances (41 Games 5-2 W-L 1.53 ERA 77 K 47 IP)

Most Valuable Rookie: Chasen Shreve (32 Games 6-1 W-L 2.02 ERA 37 K 35.2 IP)
For somebody who was just an extra piece in the Banuelos/Carpenter trade, Shreve has played a significant part in one of the better bullpens in the league. Although Shreve’s season is hard to compete against, I think some of the rookie outfielders could’ve competed for this award had they not gotten injured.
Honorable Mention: Slade Heathcott (6 Games .353 BA 1 HR 3 RBI .588 SLG)

Anti-Most Valuable Player: Stephen Drew (78 Games .182 BA 12 HR 25 RBI .257 OBP)
I think we can all agree that Stephen Drew has been a big disappointment this year. Even though some of us thought that a full Spring Training would do him good, it did not. Although the power has been there, it hasn’t help cover up his batting average. The good news is that after seeing what Rob Refsnyder has done the last two games, we may be seeing less of Drew in the second half.
Dishonorable Mention: CC Sabathia (17 GS 4-8 W-L 5.47 ERA 84 K 100.1 IP)