Brace yourselves, Yankee fans. For once, the team could be planning for the future

By Chad Raines - July 18, 2015
That future, which of course consists of familiar names in the Yankee organization like Luis Severino, Aaron Judge, Greg Bird, Gary Sanchez, Rob Refsnyder and more, may also include guys that you’re more familiar with, but aren’t currently in the organization. 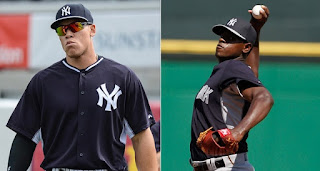 It’s no secret that the majority of Major League Baseball’s stardom lays within the under-30 category. Of this year’s 75 All-Star selections, 52 fall into that under-30 group. That’s 69 percent, and already a 10-percent increase from last year’s 53 of 86 (59 percent) under-30 All-Star selections.
The point is that a lot of the MLB’s talent is still blossoming, and more importantly, a lot of it is waiting to get paid.

Of those young All-Stars, 46 are scheduled to become free agents between the years 2018 and 2021. That’s perfect timing for a Yankees organization whose payroll obligation (currently $217 million) drops below $100 million in 2018 and below $50 million in 2019.

Brett Gardner will become a free agent in 2019, and at 34-years-old, it is likely that the Yanks will try to replace him unless he takes a discount. The same goes for Mark Teixeira, who becomes a free agent after next season, and CC Sabathia, who can walk after 2017.

Now let’s talk about some guys that might be under Brian Cashman’s radar. This isn’t the first time this name has come up, but if Bryce Harper continues to play this well and figures out how to stay healthy then he could be wearing pinstripes as the MLB’s first $400-million man in 2019. Manny Machado, Nolan Arenado, Dallas Keuchel, Dee Gordon, Matt Harvey, Yasmani Grandal and DJ Lamahieu are also amongst the list of players who will seek their first large contract before 2019 rolls around.

And if 2019 isn’t soon enough for your liking, then take a deep breath because this monster that has become the Kansas City Royals will likely have fallen apart by then as well. Alcides Escobar, Lorenzo Cain, Mike Moustakas and Wade Davis are all due to become free agents by 2018, and don’t be surprised if one of them is a Yankee. Todd Frazier and Bradon Crawford can also become free agents that year.

For those of you that are patient, 2020 features some great names as well. Dellin Betances’ contract will be up that year, but it’d be a huge surprise if he weren’t the full-time closer in the Bronx by then.

And if he is, he could be closing out games for pitchers like Madison Bumgarner, Sonny Gray, Gerrit Cole, Michael Wacha and Carlos Martinez. Paul Goldschmidt will also join that 2020 class if the Diamondbacks can’t snatch him up before that time.

The Yankees may have already won World Series 28 and/or 29 by 2021, and if they do, it could be an appealing spot for Michael Nelson Trout.

This whole plot may seem like a bit of a reach, but that’s what Yankees fans do and rightfully so. Just know that when you watched the All-Star Game, at least 10 of those players could be wearing pinstripes in the near-future.