By Chad Raines - July 06, 2015
The Yankees went to work at the beginning of this week in a series with the Los Angeles Angels of Anaheim. The Yankees lost 2 of 3 in that series. The team finished up their second series of the week against their division rival, the Tampa Bay Rays on Sunday, June 5. The Yankees took two of three from Tampa. That put their record for the week at an even 3-3.

The Yankees got pretty good outings out of their starting pitching this week. CC Sabathia pitched into the eighth inning allowing 4 runs in the series opener in LA. Ivan Nova followed that up allowing just 2 runs on back-to-back home runs in his sixth inning of work in Anaheim. Those were his only two blemishes of that game as the Yankees lost 2-1. Nathan Eovaldi strung a good outing together pitching 5.1 shutout innings in the series finale in LA. 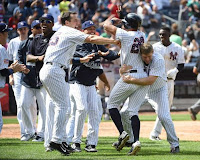 Mark Teixeira made his mark of contribution blasting a game-tying three-run home run in eighth inning in the series opener against Tampa. The Yankees would win that game on a McCann home run, of course. 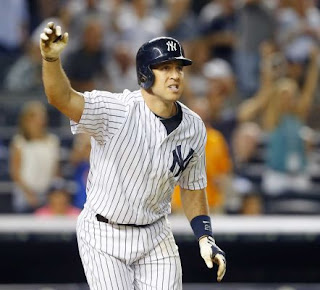 Adam Warren made his first appearance out of the bullpen this season July 1 and he was very effective. The velocity on his fastball was hitting 95 on the gun as he pitched 2.2 innings allowing just 1 hit, 1 walk and he struck out 2.

The team’s number 4 prospect according to MLB.com, first baseman Greg Bird was promoted to triple-A this week. Bird hit .258 in double-A Trenton but was riding a hot streak upon being promoted. He also hit 6 home runs and 16 doubles in 49 games in Trenton. Bird is off to a slow start in triple-A Scranton but there’s too little of a sample size to get concerned about it.

The interesting and shocking news of the week came when outfielder Taylor Dugas was called up despite hitting less than .200 in AAA and right at .200 in AA. Dugas didn’t make an appearance with the Yankees though as he was sent down after two days on the bench.

Other than that, it hasn’t been too eventful of a week in YankeeLand. With another Yankees vs. Red Sox series this week before the All-Star game a week from tomorrow, the next 10 days should be fun for baseball. And of course, the trade deadline is rapidly approaching. No blockbuster moves have been made across the league as of this writing, but I’m always excited for this time of year. The Yankees will likely make quite a few moves to plug up a few holes the team has so they can play in October in 2015. As always, we’ll keep you updated with all the team’s news on our twitter, @BronxBomberBlog