By Chad Raines - July 21, 2015
Following Sunday’s late-inning victory against the Seattle Mariners, there were reports of the Yankees scouting Cincinnati Red’s All Star pitcher Johnny Cueto. The Yankees were in fact in the building for Cueto’s start this afternoon along with scouts from the Dodgers, Jon Morosi of Fox Sports reports. The idea of Cueto being traded to the Yankees should excite many Bomber fans. On the season Cueto is 6-6 with a 2.73 ERA. In a free agent year, this would be the ideal time for the Yanks to make a move for the Ace. 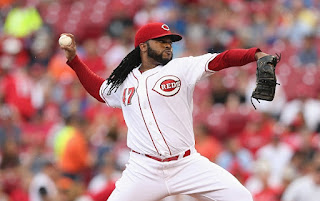 Cueto would cost the Yankees far less than someone like Cole Hamels of the Phillies would, because of the contract situation of each. Cueto is more of a rental, while Hamels is still locked into a long-term contract. So, for Cueto the Yankees would not have to give up a high level prospect like Aaron Judge, Luis Severino, or Greg Bird. It would cost them more along the lines of Rob Refsnyder and a lower level prospect or two.

In my opinion, Johnny Cueto is the perfect fit for the Yankees. He is a proven stud, but would not have the pressure he has on him in Cincinnati as the only good pitcher on the staff. He would be in a rotation with Michael Pineda and Masahrio Tanaka. If the Yankees were to acquire Johnny, they would have the one of the, if not the best, starting rotations in the American League.

Although Cueto seems like a great fit in the Bronx, you can be assured that the Yankees will not be the only team trying to acquire the services of Johnny Cueto. As mentioned before, the Dodgers are also in on Cueto, along with the teams like the Rangers, Orioles, and Blue Jays. At this point it seems like a two team race between the Yankees and Dodgers, but trade season always gets hectic and things could change very quickly.