By Chad Raines - July 19, 2015
The Yankees have played beyond expectations this year. They currently hold a 50-41 record and a 4 game lead on the Baltimore Orioles in the American League East. With 71 games to go, they must go on a run to separate themselves from the rest of the AL East and solidify its lead in the division. The top of the lineup has been consistent; the bottom not so much. Starting pitching has been average to bad, but the Yankees bullpen, as you'll read in the latter part of the article, has been monumental to the success of the Yankees this year. These next ten statements are either FACT or FICTION and revolve around all aspects of the Yankees as we enter the second half. Since my colleague on Bronx Bomber Blogger Steven Eareckson already had a predictions article, I tried to discuss other content that he didn't focus on, so hopefully the two articles complement one another. 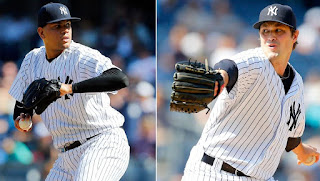 1. FACT: Betances will have a lower ERA than Miller at the end of the year.
Dellin Betances currently holds an ERA of 1.47, while Miller has a slightly lower ERA of 1.44. This is not a blurb on the future struggles of Miller, but rather that Betances may have control issues but I believe he will solve them. After walking 6 in a span of 5 games, it took him another month just to walk 5 more batters. Additionally, since returning, Miller has allowed 4 runs (2 earned). I hope that both will have low ERAs, but I simply believe that Betances will hold a lower one in the end.

2. FICTION: The Yankees will win the AL East by 5 games or more.
The Yankees have not been able to pull away while leading in the AL East. They’re currently up four games as of July 19 and will host Baltimore in a 3-game set starting July 21. Then, in a 13-day span, they will face Boston in a 3-game series at Yankee Stadium and then host and then travel to Toronto for 3 games in each city. Boston was only six games back at one point in the Yankee-Red Sox series and they aren’t out of it yet. Toronto has scored 498 runs, the most in the Majors by far and Tampa has only allowed 353 runs, which is third in the AL. Talent is present in all teams and the Yankees will not run away in the AL East.

3. FICTION: The Yankees will make a big trade at the deadline.
I just don’t see it happening. Sure, Chase Headley is struggling, Stephen Drew is nowhere near acceptable, and Didi Gregorius isn’t the star the Yankees thought they were signing. But, any infielder trade will involve Rob Refsnyder and/or another prospect, perhaps Aaron Judge or Bird, and hopefully, Brian Cashman will realize that it’s not smart. With the current roster, the Yankees already have playoff-potential. A starting pitcher would be nice, but I am not sure the prospects that other teams will ask for are worth giving up.

4. FACT: Stephen Drew will raise his batting average to over .200.
This doesn’t seem like much, but at least it will be past the current .181 or whatever measly average he has. He knows the pressure is on - the possibility that he might be replaced in a trade or by Refsnyder permanently. He’s only had 45 hits in 249 at bats this year. In order to have a .200 average currently, he would need 50 hits, only 5 more. Eventually, he’ll find it - and hey, in his last 7 games, he’s gone 3/15, exactly .200!

5. FACT: Alex Rodriguez will have a total of 31-34 home runs by the end of the year.
Since June 13, Alex Rodriguez has hit one home run every four games that he fully plays in. With 71 games to go, that means he will hit around 17-18 home runs before the season ends. He’s hit 19 this year. So on average means he’ll total around 35 home runs this year. That may be a bit high. So to be more conservative, I’ll predict 33 home runs. This is still far beyond any expectation that anyone set for him. Will he reach 700 home runs this year? Probably not. He’s at 673 right now and it’d take another 27, which would mean two home runs every five days.

6. FICTION: The starting second baseman during late September will be Stephen Drew.
Just because I said he’d hit more than .200 eventually doesn’t mean I had enough faith in him. With active roster expansion in September, the Yankees will likely call up Rob Refsnyder. At that point, Drew will have no excuse to be still hitting as low he will be then, which is around .200. Refsnyder will hopefully polish his mechanics in his next month at Scranton/Wilkes-Barre, and come late September, he’ll be the guy.

8. FACT: Mark Teixeira will hit 40 home runs and drive in 110 runs.
This statement is pure faith in Tex. As of July 20, he has 23 home runs and 63 RBIs. 110 RBIs is pretty much reachable, he just has to continue the path he’s on. 40 home runs may be a stretch - but his power is back and it is to stay. He’s also extremely clutch as seen in the Seattle game today. But he’ll hit 40 home runs if he stays on average with the amount he’s hit so far - 23 in 91 games.

10. FACT - The Yankees will have 4 relievers (that have pitched all year) that will have an ERA lower than 1.94 ERA by the end of the year.
I already discussed Justin Wilson’s ERA in Statement #9. Dellin Betances & Andrew Miller will have ERAs of around 1 when it’s all said and done simply because they’ve already proven themselves. If Betances did not have the Philly and Angels outing, he would have a sub-1 ERA. Now, we move onto Chasen Shreve. Shreve owns a 1.93 ERA so far - 8 ER in 37.1 IP. Like Justin Wilson, Chasen Shreve didn’t allow an earned run in the month of June. Shreve has pitched less than Wilson and pitches more when the Yankees need to hold the opponent scoreless when they have to rally - so I’ll assume 22.2 more innings for an even 60 IP at the end of the year. To achieve a 1.80 ERA, he’ll need to give up only 4 more earned runs this year. He may have given up an earned run in two straight games recently, but before that, not a run given up since May 22. Shreve may not be thrown into high leverage scenarios anymore, but he’s still the great reliever he was earlier.

BONUS PREDICTION - FACT: Dellin Betances, Andrew Miller, Justin Wilson, and Chasen Shreve - all 4 combined - will have a TOTAL of 44 saves, 65 holds, and a 1.80 ERA by the end of the year.

Before I begin a discussion on the ERA of these relievers, understand that I mostly used averages and basic math to drum up this prediction. In 91 games, they’ve pitched 149.2 IP - so on average, these 4 handle about 1.61 innings in every game. With 71 games left, they’ll handle another 117.1 innings the rest of the way - that’s 267 IP at the end of the year. I doubt they’ll be used as much (and I hope not), so I went with 245.0 IP. I see Shreve and Wilson allowing 12 ER at the end of the year. Betances may give up a bit more since he’s used more often, so I’ll assume 14 ER. Miller is iffy but he looks great, so I’ll go with 9 ER. Wins are harder to deal with so I won’t predict that. However, holds, saves, and ERA can be.