I Hate Everything About You: Yankees vs Red Sox Series Preview

By Chad Raines - July 10, 2015
Bet you didn’t expect song lyrics in the title did you? Maybe the hate isn’t what it used to be but Friday night in Boston the greatest rivalry in sports continues as the first place Yankees take on their historic foes, the surging Boston Red Sox. The Yankees have taken four of six from the Red Sox this year including a three game sweep in early May. New York is fresh off a series win against the Oakland A’s while the Red Sox have won their last four series and won nine of their last twelve. The Bronx Bombers have 5.5 game lead on the Red Sox who currently sit last in the division. This series could cement the division for the Yankees or allow the Red Sox to get right back in the thick of things in the AL East. 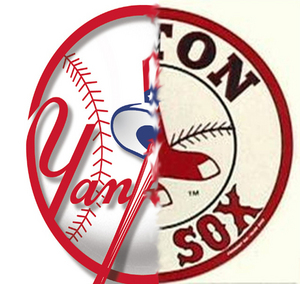 Game 1: Clay Buchholz vs Michael Pineda
Game 1 we get to see the best pitching matchup of the series. Both Buchholz and Pineda have led their respective staffs this year and it will surely be a treat to watch them. Pineda will enter Friday’s game with a record of 8-5 and a 3.79 ERA, whilst Buchholz counters with a 7-6 record and a 3.27 ERA. This pans out to be the best game of the series and the winner will more than likely win the series. Buchholz has been the better pitcher this year but the Yankees did light him up in early April. Tensions will be running high as this game already has an October feel to it even though it is still just mid July.

Game 2: Eduardo Rodriguez vs Ivan Nova
Games two and three both are tossups. Boston’s star rookie Eduardo Rodriguez will get his first taste of the rivalry as he takes on Ivan Nova. Nova has just recently come off the DL and will look to silence the Red Sox hot bats.

Game 3: Wade Miley vs Nathan Eovaldi
Game 3 of the series could be a high scoring affair. Miley is a guy who really works quickly and when he keeps his pitches low in the zone he is highly effective. However, he tends to walk a great deal of batters (7 two outings ago) and if he leaves it high the Yankees are going to let it fly. Eovaldi’s last outing vs Oakland was a positive step for him, he allowed two runs over five innings in what would be an eventual Oakland win (ugh Brett Lawrie). For a guy who throws as hard as he does he doesn’t get many swings and misses. This is going to be a key for him because the Red Sox as of late have been excellent putting the ball in play. Fenway plays small so don’t be surprised if either team has a few dents in the green monster.

Three Players to Watch for each team:
As the mid summer classic approaches we are treated to this historic and amazing rivalry that stretches back oh so far. Here are three players on each team I think will play huge roles for their teams.

Yankees
Red Sox
Buckle up folks, there is nothing better than this its, Yanks and Sox live from historic Fenway. Pride, Passion, Pinstripes, this series will have it all.