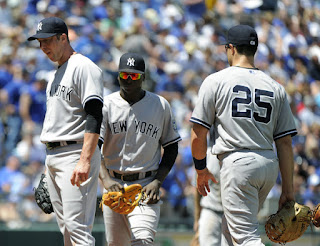 I’m currently watching the July 28th game between the Texas Rangers and the Yankees. It has been ten minutes since Capuano exited. Yankees manager Joe Girardi sent Chris Capuano to the mound for a spot start, in an attempt to give the rotation, especially Masahiro Tanaka, some extra rest. Some context: Capuano started the season on the DL and started three times. He went 0-3 with a 6.39 ERA in those three starts. Not good. Since then, he’s been a mop-up man. In his last seven games, he’s pitched 9.1 IP, given up 7 earned runs and 11 hits. He didn’t improve even when thrown back into the mop-up role.
Today was July 28th. Girardi wanted to give the rotation a break. Fine. We all saw what happened with Pineda. Now, the Yankees called up Diego Moreno and have a starter in Adam Warren, who’s pitched well. Why start Capuano? What has he proven that Warren hasn’t? In contrast to Capuano, in the last 7 games, Warren has a 3.86 ERA, allowed 3 earned runs and 7 hits in 7 innings. He’s pitched much better! And while Warren was a starter, he went 5-5 with a 3.59 ERA. Those are much better statistics than Capuano.


Capuano stayed in the game much too long. He walked 3 of the first 6 batters. After getting 2 outs, the next 7 batters reached base. He walked FIVE in the first inning. FIVE. After Beltre almost homered, it went walk-single-walk-single-double-walk-walk. Getting hit hard is one thing, but free passes? In the first? This was an unacceptable outing and Capuano needs to go. He is not a serviceable starter nor a mop-up reliever, as he cannot keep the Yankees in the game when the Yankees are behind.. This is not an argument for Warren to be a starter, but that he should definitely be higher up the ladder than Capuano for sure. Bryan Mitchell, who is now in AAA, could’ve done Capuano’s role! He was doing well while up in the majors.


Here’s what I would do. Send down or DFA Capuano. Call up Bryan Mitchell and allow Warren to move into a middle-relief role, similar to what Shreve is doing. This way, the Yankees pen from top to bottom will not only be effective, but strong as well.