Is Baseball Back in New York? 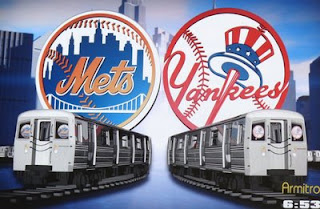 The MLB playoffs haven’t featured the Mets and Yankees since 2006, but it’s hard to avoid this thought if you take a look at what both clubs have done over the past few days: Is baseball back in New York?


The Mets (52-48) collected 21 hits in a 15-2 win over the Los Angeles Dodgers on Saturday and followed that with an extra-inning victory on Sunday in which they faced All-Star Game starter Zack Greinke. Juan Uribe (acquired in a trade with Atlanta on Friday) clubbed the walk-off double. The Mets ended Greinke’s scoreless streak at 45 2/3 innings.

Last night, rookie pitcher Noah Syndegaard took a perfect game into the seventh inning against the Padres before allowing just three hits over the next two innings in the Mets 4-0 victory. The team’s shiny new closer, Tyler Clippard (acquired in a trade with Oakland on Monday), earned the save.

The Yankees (57-42) collected two comeback wins (8-5 and 7-2) this weekend over the Minnesota Twins, who are surprisingly making their own run at a playoff spot. Those victories included home runs from four different Yankees, and none of them were hit by then team-leader Mark Teixeira. They’ve since won two more games against the Texas Rangers, one of which was last night’s onslaught that featured an MLB-high 21 runs.

Both teams, one more than the other, are very alive in the hunt for October.

The Yankees are in first place in the AL East and lead the Baltimore Orioles by seven games. They haven’t had a division lead this large since July 29, 2012.

The Mets sit one game below the injury-plagued Washington Nationals at second place in the NL East and three games behind the Giants for the second wild card spot. The Mets haven’t been over .500 this late in a season since Aug. 9, 2011, let alone in a playoff race.

While neither fan base enjoys seeing the other happy, both could agree that some importance behind the Subway Series scheduled for Sep. 18-21 at Citi Field would be exciting.