By Chad Raines - July 19, 2015
The Yankees and Mariners finished off a three-game set in the Bronx with a lopsided pitching matchup. Perennial Cy Young contender Felix Hernandez (11-5, 2.84 ERA) faced CC Sabathia (4-8, 5.47 ERA), who is having one of his worst years ever. The Yankees played one of their best games of the year, winning a pitcher’s duel against King Felix, 2-1, even though the game winner was hit off of Fernando Rodney. 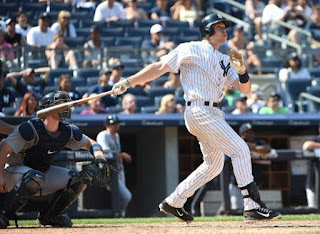 I’m deviating from my usual inning by inning approach since not much happened in this game. Both pitchers were excellent even though they lasted only six innings. Felix Hernandez allowed only 5 hits and struck out 5 in 6 innings, even though he gave up 3 walks. CC Sabathia was even better, striking out 7 and giving up 6 hits. Both pitchers gave up an earned run from an RBI single. Carlos Beltran, in his return off of the disabled list, hit an RBI single. In the 8th, Fernando Rodney came in with the game tied at 1. On the 1-2 pitch, Mark Teixeira promptly drilled a go-ahead home run off of Rodney with 2 outs to give New York the 2-1 lead. Dellin Betances had pitched a scoreless 8th although he walked Cano and Seth Smith. Andrew Miller pitched a 1-2-3 ninth to give the Yankees the 2-1 win.

MY TAKES
Dellin Betances has been improving as of late. After giving up 3 earned runs in 2 outings, he has delivered 5 straight scoreless appearances, with a line of 5.1 IP, 1 H, 3 BB, and 8 SO. His ERA has since improved to 1.47 after it spiked to 1.61. Betances is a huge weapon that cannot be forgotten, but he must curb his control issues.
Mark Teixeira, probably the MVP of the Yankees for the first half, went 5-10 for this series, with a double, home run, and the go-ahead RBI that gave New York the win.
Except for allowing an earned run on July 1 against the Angels, Justin Wilson has not given up an earned run since May 24. He has pitched 22 times since May 24. Statistically speaking, he has been the most efficient and most reliable reliever - his ERA of late is lower than Betances and Miller just came off of the DL.

LOOKING FORWARD
The Yankees will stay home and host the Baltimore Orioles in a three-game set starting on Tuesday, July 21. The Orioles will send Wei-Yin Chen to the hill to face Nathan Eovaldi. This game is at 7:05 PM ET. Ivan Nova faced Kevin Gausman in Game 2 at 7 PM ET and in Game 3, Ubaldo Jimenez faces Masahiro Tanaka.