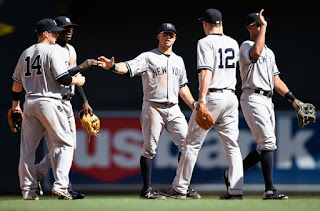 
Once again, I deviate from the usual inning-by-inning simply because the 6th inning was the most important. Up to that point, both teams had scored one run. In the bottom of the 3rd, Torii Hunter’s groundout to Chase Headley scored Aaron Hicks. Chase Headley tied the game with a solo home run to right in the top of the 5th. In the 6th, the Yankees broke it open. The Yankees loaded the bases when Gardner singled and then Teixeira and McCann both walked. Bases loaded and no outs. After McCann struck out, both Garrett Jones (RBI) and Headley (2 RBI) singled to create a 4-1 lead. The Yankees added three more runs to make it a 7-1 lead. Didi Gregorius bunted to second that scored Jones and then Stephen Drew (yes, Stephen Drew) hit a 2-run homer! Eovaldi pitched into the 9th inning for one of his best starts of the year. The Yankees won 7-2 and the series.


1. The Yankees looked like they were going to lose the series until Alex Rodriguez hit his 3rd home run in Saturday’s game and then John Ryan Murphy played the hero with his 3-run home run. Definitely the turning point of the series.


2. Excellent hitting - Mark Teixeira went 5-8 in the first two games of the series & Alex Rodriguez hit three home runs on Saturday night and drove in 4. A-Rod and Tex combine for 47 home runs this year and are on a tear.


3. John Ryan Murphy’s second CAREER home run was HUGE - it gave the Yankees the lead in Saturday’s game and was the game winner in the 8-5 victory over the Twins.


4. Division lead update: 6.5 games over the Blue Jays. The Yankees are playing well as of late and must keep this going.


5. Nathan Eovaldi had gone four straight starts + eight innings in his 5th start without giving up an extra base hit. Eovaldi was also very efficient, throwing only 100 pitches in 8+ innings. He had thrown 100 pitches in 5 innings at least 4 times this year.