By Chad Raines - July 12, 2015
For the middle game of a 3-game set, the Yankees sent Ivan Nova (1-2, 2.65 ERA) to the mound to counter Eduardo Rodriguez (4-2, 3.69 ERA), the starter for the Red Sox. Also, the Yankees called up Rob Refsnyder from Triple A-Scranton/Wilkes-Barre to counter the LHP Rodriguez for this Saturday 7:15 PM start and for tomorrow as well. Boston won 5-3. 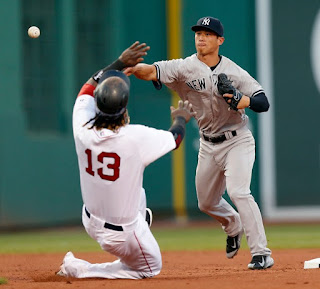 1st Inning
The Yankees, specifically A-Rod, wasted no time to get started in the top of the 1st. With 2 outs and none on, like he did off Buchholz last night, Alex Rodriguez drilled Eduardo Rodriguez’s 2-1 pitch over the Green Monster in left to give New York a 1-0 lead. In the bottom half, Ivan Nova retired the Red Sox in order.

2nd Inning
In the bottom half, the Red Sox put runners on the corners with none out when Ortiz doubled and Ramirez singled to right. However, Sandoval swung at a first pitch curveball and popped out to Gregorius. Then, Napoli swung at a 2-0 fastball and grounded it into a 5-4-3 double play. The Red Sox wasted a great opportunity to at least tie the game and the Yankees remained in the lead 1-0.

3rd Inning
Rob Refsnyder made his Major League debut in the 3rd but grounded into a 4-5-3 double play. Jacoby Ellsbury then singled but was picked off by Rodriguez, much to the delight of Red Sox fans. The Red Sox tied the game at 1 when De Aza singled, stole second, reached third on John Ryan Murphy’s errant throw to second that sailed into center field, and scored on Hanigan’s slow grounder to second.

4th Inning
Besides a walk by Teixeira, the Yankees did not threaten. However, Boston did. Ortiz led off the fourth with a single into the right field corner. The next batter, Hanley Ramirez, drilled a belt-high fastball into the Red Sox bullpen for a 2-run HR that gave Boston a 3-1 lead after 4 innings.

5th Inning
The Yankees went down 1-2-3 in the 5th. Mookie Betts doubled to center with one out but Nova got out of the jam with a groundout to Refsnyder and a flyout to right.

6th Inning
After Refsnyder lined out and almost had his first Major League hit, but was robbed on a diving play by De Aza, Jacoby Ellsbury homered to center to cut the deficit in half. Yankees only trailed, at this point, 3-2. Nova retired the Red Sox in order in the bottom half with help from Gardner, who made a beautiful play by jumping up against the Monster to catch an Ortiz flyball. Boston remained in front, 3-2.

7th Inning
Eduardo Rodriguez exited the game with one out in the 7th and Junichi Tazawa recorded the last 2 outs of the 7th with no problem. In the bottom half, Adam Warren came in with De Aza on second and two out. The first batter, Mookie Betts, hit a deep flyball to right that Chris Young should’ve caught but didn’t and resulted in a triple that scored De Aza. After a walk to Holt, Bogaerts beat the shift on an infield single to second that made it 5-2. Then, Chasen Shreve came in, walked Ortiz, but struck out Hanley Ramirez swinging after a long at-bat. At the end of 7, Boston led 5-2.

8th Inning
Tazawa got two outs but Jacoby Ellsbury reached on an infield single to second. Then, Brett Gardner, after a good at-bat (when does he not have one?) doubled into the left center gap, scoring Ellsbury from first. However, Tazawa would get A-Rod to ground out to end the inning. Yankees cut the deficit to 5-3. The Red Sox did not score in the 8th and left Napoli at 2nd.