By Chad Raines - July 12, 2015
For the final game of the 3-game set, the Yankees sent Nathan Eovaldi to the mound. Eovaldi has been extremely hittable all year. The Red Sox countered with Wade Miley, who hasn’t pitched too well all year. This was the last game before the All-Star Break, and the Yankees won it, 8-6 and went into the All-Star Break with a record of 48-40. 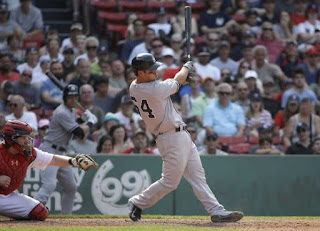 1st Inning
Neither the Yankees nor Red Sox scored in the first. Holt reached third with two out but Eovaldi retired Sandoval on a groundout.

2nd Inning
The Yankees struck first in the second. After a Teixeira single and a Young flyout, Brian McCann hit a home run to left and the Yankees went up 2-0. In the bottom half, Eovaldi allowed a single to De Aza but that was all.

3rd Inning
The Red Sox took the lead in the 3rd. There were men on first and second with one out when Bogaerts hit a 1-out single that scored Ryan Hanigan. Then, Pablo Sandoval singled to right, scoring Mookie Betts. The Red Sox concluded its scoring in this inning with a 3rd straight single, this time by Hanley Ramirez, scoring Bogaerts. The Red Sox led 3-2 after 3 innings.

5th Inning
There were men on first and third with none out when Wade Miley balked, scoring McCann from 3rd and the game was now tied at 3. McCann reached on a double and Headley on an infield single. The Red Sox went down 1-2-3.

6th Inning
The Yankees scored 3 times in the 6th, courtesy of three RBI doubles. After Gardner singled, A-Rod hit a tiebreaking double to center, scoring Gardner from first. Young and Headley both doubled to deep left as well, and New York led 6-3 after 6. Adam Warren came in to the game and allowed a Ramirez double and Victorino RBI single and left after getting one out. Justin Wilson entered. With 2 out and men on 2nd and 3rd, he extinguished the threat by getting Mookie Betts to fly out. 6-4 Yankees.

7th Inning
Rob Refsnyder led off the 7th with his first Major League hit, a single to center. Neither team scored in the 7th. Dellin Betances came in with 2 outs and struck out Hanley Ramirez swinging.

8th Inning
Neither team scored in the 8th. The Red Sox had men on first and second with 2 out but Betances struck out Mookie Betts to end the threat.

9th Inning
Rob Refsnyder delivered. With one out and Headley on second, New York was in need of some insurance runs. And Refsnyder drilled Ogando’s 2-2 pitch over the Green Monster in left, giving New York a 8-4 lead. The Yankees would win 8-6 but it was not without 2 errors by New York’s defense. Hanley Ramirez reached on an error by Refsnyder (but probably not his fault) that scored Brock Holt. De Aza’s sac fly made it 8-6 but Miller, with Ramirez on second and the tying run at the plate, got Victorino to pop out to end the game.

MY TAKES
Rob Refsnyder looked solid in his two games as a Yankee. In Game 1, he went 0-3 but made multiple good plays on defense, especially turning a 5-4-3 double play and charging a slow roller. In Game 2, his bat finally came alive and gave the Yankees 2 much needed insurance runs. He may be used right now as a showcase for trades, but he is looking as a very valuable asset should he stay in the Bronx.

The Yankees bullpen continues to deliver. The trio of Justin Wilson, Dellin Betances, and Andrew Miller have been lights-out this year.

Adam Warren looks very rattled. Some say that his move to the bullpen shattered his confidence, but it is where he can make a huge impact for New York. The Yankees don’t have a right hand arm for high-leverage scenarios other than Betances in the pen right now, so having him would help the Yankees greatly.

LOOKING FORWARD
Good luck to Dellin Betances, Mark Teixeira, and Brett Gardner as they travel to Cincinnati to represent the Yankees in the 2015 All-Star Game.

After the All-Star break, the Yankees will host Seattle in a 3-game set, starting on Friday, July 17. Game times are 7:05 PM on Friday and 1:05 on Saturday and Sunday.